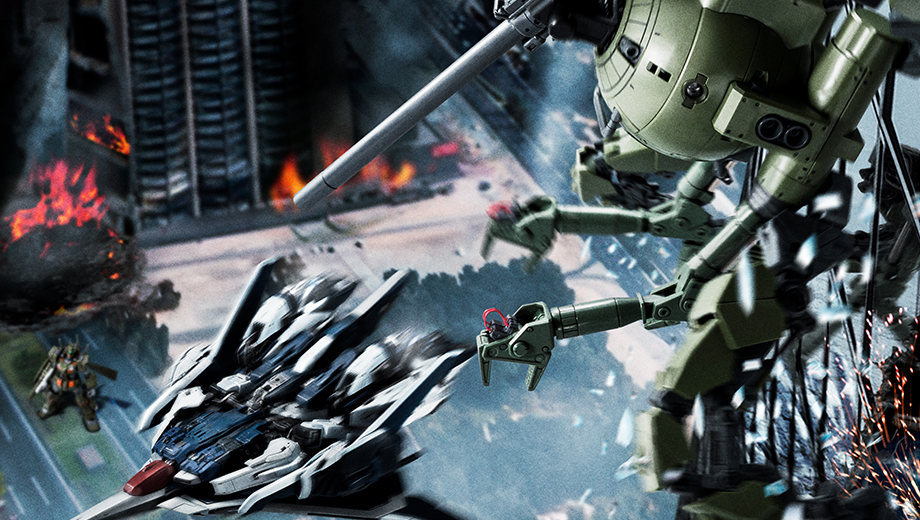 Are You Gonna Go My Way? ~Bolting For Freedom~

The rather sleek young man slid into his dark cockpit with a glowing instrument panel set on low for space combat, fixed himself to the ejection seat with ease without even looking, and set his eyes on the TMS (Target Management System) display. He meant to sigh, but a whistle came out instead.

“…Can you do this, Yoshi?” The commander asked worriedly from the radio.

Hmph. Yoshi let out a laugh. He was sure that the commander actually didn’t care one bit.

“Well, it doesn’t matter if I can’t, doesn’t it? We were assigned to do this, right?”

The deep, heavy pulse of the generator turned into a powerful, reliable hum, which sent a tingle up his behind.

There wasn’t any time to lose. Every minute, every second mattered.

He put both feet on the thrust pedals and placed his hands on the control grip. While carefully adjusting the trim tab with his thumb, Yoshi set his eyes on a single glimmer in the distance that showed through the sea of stars he found from the opening catapult hatch.

“I’ll get there, even if it’s the edge of hell itself…”

GIMM and BALL’s cries of joy echoed through the GBN Center Lobby. Divers dressed in an endless variety of different avatar costumes all turned their eyes to the two, who held their fists up high in victory at the Mission Entry Counter.

GIMM and BALL were trapped in the world of GBN because of a scheme devised by an underground worldwide model mold mafia that plotted to spread their Fake Gunplas all over the world (read Episode 0 for more details). One wanted to get a real girlfriend that he had never been able to get because of the arranged fiancée he never wanted, and the other wanted to swing his light sticks to his heart’s desire at a premium concert featuring the idol he obsessed over. They had to logout from GBN no matter what it took them, and believed that the key to returning to the real world was to get the Golden Poly-cap, according to a voice they heard in a mysterious shining light.

Anyway, anyhow, in any case, the two went to the Mission Entry Counter at the GBN Center Lobby to search if there was some kind of mission along the lines of “Challenge the Legendary Gunpla!” with low expectations. GIMM said to the counter receptionist, “Come on! You’ve gotta come with us to our LGBP (Legendary Gunpla Battle Party)!” without even wondering where or who the mysterious voice had come from. While GIMM was busy, BALL browsed through the mission catalog as though he was looking for vintage records at a record shop.

“What? I was almost there! Don’t interrupt me! Thinking about it, there’s no way that there’s a no-brainer mission that says ‘Let’s challenge a Legendary Gunpla!’ in the first place. This kind of thing probably requires us to walk our legs off, and the struggle is what makes it worthー”

“No, no, no! L-l-look at this!” BALL grabbed GIMM by the neck and shoved it towards the mission info.

It took a while for everything to sink in.

Thus occurred the event in the beginning.

“What the heck! We don’t need any Legendary Gunpla! We can separately get our Golden Poly-caps!”

With both fists held up high, GIMM forgot his little speech about what made their search worthwhile and rejoiced. BALL shook his head and looked up into the air.

“Separately? More like ‘all-you-can-take’! But what kind of weird mission is this?!”

BALL had told GIMM that the attractions that awaited them were said to be traditional amusements originating in an island in the far east which had been passed down for generations.

Hearing this, GIMM looked down at the “thing” his Gunpla was holding in its right hand.

“This… ‘thing’ looks like a tennis racket, but there’s a thin piece of paper where there’s supposed to be strings…”

Surrounded by cheering Divers and Gunplas, the capture area of the Poi in the approx. 18-meter tall GIMM Turbulence’s hand was about a meter wide. It seemed like an easy mission that required the use of the paper section of the poi to scoop up a golden poly-cap, only about 10 centimeters wide, that was floating in a pool-sized water tank.
“If only the paper was also converted into a thicker MG scale to match the GM Turbulence,” GIMM mumbled.

“My grandma used to say that this kind of slyness added spice to tradition. Oh, and pois are originally for scooping goldfish,” BALL said, now with a crisp tone.

”They changed the goldfish into Golden Poly-caps because its a Gunpla thing…huh.”

As a result, the two used up all of their Force Points with the entry fees, but were not even able to get one golden poly-cap, let alone all-they-could-take. However, even if they were able to get one...

When they looked closer, they saw golden paint that had peeled off.

“Ah, I know this trick! It’s like when they dye baby chicks with purple paint at festivals.”

It was too late, and the two drooped sadly.

Whether because it wasn’t an event that featured Gunpla battles, or because the whole place looked like an easygoing traveling carnival, the Amusement Park Dimension seemed to be mainly occupied by kid Divers (or at least Divers who looked like children). Other than the (fake) golden poly-cap scooping attraction, there was a pin vice shooting gallery, a multi-color injection molding merry-go-round, and other somewhat nostalgic pastimes as well as a row of a few food booths.

“There seem to be Divers earning Force points by running attractions and selling food instead of doing Gunpla battles.”

“I heard it’s one of this Dimension’s unique systems.”

Therefore, the Dimension had a special hunger meter set for Divers.

”By the way, the catering I ordered before we got scammed at that scooping thing isn’t here yet.”

BALL said to a frustrated GIMM, “That’s why I told you that we should’ve gotten food from those booths.”

”Actually, I have a policy of refusing to eat food cooked outside.”

However, BALL thought that there must be something that GIMM would accept and went on to look for an adequate food booth.

“By the way,” BALL said, noticing something. “Did you notice that all the Gunplas we met so far after logging in were almost all MG kits? Like the ones in this Dimension.”

“What? Really?” GIMM hadn’t noticed this and turned to observe the Gunplas participating in the various attractions around them.

“But how do you tell their grades when they can turn big?”

“You actually can tell them apart. The forms of the original kits are completely different. MG kits have more detail, and they have more articulation from the start. They can also recreate complex details like combining and transforming.”

They had heard that there were servers and Dimensions that limited kit grades, but did they coincidentally log in to one of them? Or maybe…

Indeed. They were back to square one. They had to obtain a real Golden Poly-cap. Now. And thereforeー

“We have to look for the Legendary Gunpla, or else we’ll never be able to logout from GBN.”

“Then where is this Mr. Legendary Gunpla? Do you think we’re gonna go and search every single Dimension? Don’t you think that going through all that would literally be the same as being trapped here forever?”

“Don’t ask me? Wasn’t it you who said that ‘walking our legs off’ and that ‘the struggle is what makes everything worth it?’” BALL shouted at the image of GIMM on the communication window when he noticed a girl standing by his Gunpla.

She looked like a high school student and had shoulder-length hair tied into a ponytail. Her large eyes were opened wide and was shouting something toward them.

BALL knew that there was an exterior microphone somewhere, but saved himself the frustration of looking for the switch by instead opened the back hatch and climbed out to find the girl had walked toward him and was waiting.

Before BALL could ask “May I help you?” she told him.

“What you two are waiting for will soon make its way here.”

GIMM watched the two from his cockpit with a puzzled look, when suddenly a deafening alarm went off.

“A proximity warning… Something’s coming from right above us!”

BALL heard the transmission from GIMM from his open cockpit and looked up at the sky.

There was a shimmering light where the two were looking, and as it became as bright as a star in daylight, its glow grew larger and larger, revealing its true identityー

“A spacecraft? It came all the way from space and entered the atmosphere?” BALL and GIMM murmured to each other while it sped towards the two and seemed to magically transformed into a humanoid form.

”A Gunpla?!” GIMM gasped with astonishment, forgetting to return to his cockpit.

The Zeta Gundam that had appeared gradually closed in on the GM Turbulence and Polypod Ball, braked, and landed. It bent its knees slightly to absorb the shock and then slowly extended its spine, raising itself to its full height. A hatch on the chest opened up and a rather sleek young man appeared from the cockpit with a basket in his hand.

“Sorry to keep you waiting! This is Miki-Tei Catering, here to connect tastiness and space with a warm heart!”