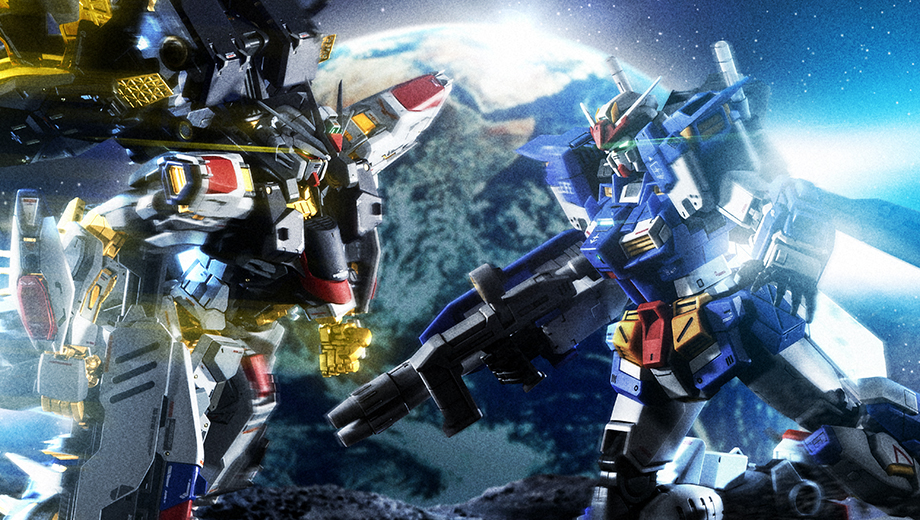 We Built This City ~The Man Who Makes Cities~

The certified debris gathering area which looked like asteroids was a special district outside of the atmosphere where construction waste created by Force Nests in colonies could be specially disposed. Or that was at least what it was designed to be. Did the Dimension designers of GBN have a sense of humor? Did they take their jobs a bit too seriously? Or did they simply have too much time on their hands? Whatever the case, BALL was thankful to have giant objects floating around that were large enough to hide behind in his Polypod Ball.

The Ball, the Gunpla that became the base kit for the Polypod Ball, was not originally designed as a melee -based mobility weapon. Adding to this, its size resulted in a limited amount of propellant, making it overwhelmingly disadvantaged in battles based on maneuverability using thrusters set in microgravity.

However, the Polypod Ball had legs. Many legs.

BALL felt the presence of his opponent slicing through the vacuum of space and closing in. He reflexively changed his position using the floating objects around his legs as a step. He wondered if the thing that one of his right legs had just kicked was a piece of debris or the remains of a Gunpla that was destroyed long ago.

“I don’t care what it was,” BALL muttered, focusing on his fighting spirit. “But I’m the one who’s definitely gonna win this fight. I’ll make him say uncle…even if I’ve never said nor seen anyone actually ‘Say uncle’ before!”

He looked around but didn’t see the GM Turbulence, so BALL was fighting a powerful opponent alone.

It was right before BALL logged on to GBN.

He wildly pushed his ten-year-old model Mobilegear phone to his ear in the overcrowded lobby of the GUNDAM BASE.

“The GUNDAM BASE was chosen as a place for an AR giveaway for some cute game character! There are many fans coming for that, not just Gunpla fans! It’s like the orange city line during rush hour!”

GIMM’s barely audible voice came from the Mobilegear phone between the outbursts of the sound of the crowd.

The call from GIMM ended there.

The sudden rejection upset BALL. The blood drained from his face and he felt his ability to think fade away.

“...Is it because of my ten-year-old model Mobilegear phone? Is it because its OS isn’t subject to updates anymore and can’t install the app to receive that cute AR game character?”

BALL knew that this was not the case. But then what was?

The blood that had left his head entered his heart and was now boiling. He was angry for his friend’s unreasonable betrayal. They were supposed to be great friends who swore to find the Legendary Gunplas together, combine their strengths and win in a battle, drop a punchline, and get the Legendary Poly-caps!

A thought popped up in BALL’s head. He might be planning to enjoy a party by himself! Could that be it? It had to be it! And if that’s the case...

“I won’t make that happen! I’ll get the six remaining Golden Poly-caps before him. I’ll collect them all!”

The young man’s Diver Name was ‘Shimoda’. That day, he had free-flowing hair, a tall body that looked even longer because of his small face, a clean mechanical engineer uniform, and was going from Force to Force as he usually did.

“Do you have any dissatisfactions or problems with the Force Nest you’re currently using?”

He was a special Diver who earned Force Points by customizing and renovating Force Nests in GBN.

But he had never actually earned a single Force Point from this occupation.

“You want to expand your Gunpla storage area because you have new Force members? Then I’ll prepare a hangar the size of the Anaheim Electronics’ factory on the moon. You’ll be able to fit hundreds, even thousands of… What? There aren’t even ten new members so you don’t need one that large? I see. I recall that you also asked for a place to for your members to relax. Then how about bringing thrill rides and amusements from around the globe in one place… What? You don’t have a yard that large? You also said you wanted to raise your members’ morale for battles. We can add a food court that serves all three meals cooked by three-star restaurant chefs from all over the world…”

He had never received any orders because his suggestions were overly excessive and tasteless.

And there he was, being asked for a place where Force members could relax after battles and suggesting to renovate the Force Nest into a health spa-land. His idea was instantly refused, so he gloomily returned to his office.

The sun had already set.

When he had reached the entrance, he found a woman standing next to it. She had black hair that reached her waist, thin beautiful eyes, and long eyelashes. She was wearing a simple plain dress.

‘She might be a customer,’ Shimoda thought, and stretched his back and put on a smile.

“Are you here to refurbish your Force Nest? Or perhaps a renovation?” he asked, reaching for the touch sensor on the door.

“Neither of them,” the woman said, stepping toward Shimoda.

In front of the opened door, Shimoda quizzically gazed at the woman’s face. He was good at remembering faces due to the nature of his job. He would never forget anyone he met during work, including his customers.

He looked at her for five seconds. Ten seconds, eleven seconds, thirteen seconds, sixteen seconds passed, before he let out a cry, finally remembering her.

The door to his office was still open.

Loretta signaled with her hand for Shimoda, who was still standing with his jaw dropped, to enter the room.

“The thing about Divers is that you still tell people apart by the way they move their eyes in reality, even if you have an avatar on.” Shimoda remarked while placing two cups of coffee on the sofa tables in his reception room before sitting across from her.

“You still have those sparkling eyes you had when you first came to our place...but maybe I'm just joking.” Loretta said mischievously, pouring milk in her coffee.

Shimoda’s expression hardened. “How did you know I was here?”

“You showed me the Gunplas you always assembled to feel better after being depressed from your mistakes at work. They were wonderful. They were full of passion, so I thought that you might shut yourself in GBN, a world filled with Gunplas.”

There was a faint imprint of lipstick left on the cup where she had taken a sip.

“I’m not returning to the company...” Shimoda muttered.

“You should know that I don’t have the talent I need if you were my boss. In fact, I don’t have any talent at all. I thought that I’d do well in GBN…that maybe I might be able to succeed in this world. But it was exactly the same as in reality. I haven’t even received one call for an order.”

Shimoda gripped his cup of coffee.

“Even the Gunplas I make...I’m probably the only one who thinks they’re cool. I got arrogant.”

He looked into his coffee, seeing his face crumpled by his own patheticness. He swirled his spoon to get rid of his reflection.

Loretta gazed at Shimoda for a while and stood up as a reply.

“Mind if I borrow your shower?”

“Are you going to make a lady sleep on the sofa?”

“No. But are you intending to stay overnight?”

“Of course I am. You might run away and vanish if I logout and take my eyes off of you. Is the shower this way?”

Loretta slyly found the living quarters in the back of the office and demanded, “And let me borrow a bath towel too. A clean one.”

Ignoring Shimoda’s attempts to stop her, she arrogantly headed for the shower room.

Shimoda took in a deep breath and let out a sigh of defeat instead of going after her. He knew that Loretta was the kind of person who never backed down on her word.

Despite having a hectic night, Shimoda fell right to sleep as soon as he lay down due to the built-up fatigue from the sales activities during the day, even though he was on the uncomfortable sofa in the office room. What he didn’t know was that Loretta had been sleuthing through his house during the whole night.

The next morning, Shimoda was awoken by a sound coming from an unfamiliar bell. It took him a while to realize that it wasn’t an alarm bell and was actually his phone that was ringing.

“Could it be an order from a customer?!”

He awoke from his drowsiness in an instant. He quickly snatched the receiver.

“Thank you for calling! Are you thinking to refurbish your Force Nest? Or perhaps a renovation?”

A perplexed voice came from over the phone.

“Um, actually, no. I called to register for the Gunpla battle I read about on a flyer.”

Shimoda thought it was a call for a different number and his shoulders sank. But then realized that Loretta was nowhere to be found.

“We’re holding a Gunpla battle knockout competition! Winners will be given the prize of their choice from this list!”

Loretta was handing out flyers on a large street fairly far from Shimoda’s office. He rushed toward, finally finding her.

“I wanted to see those sparkling eyes of yours again.” She replied.

Loretta proudly presented the flyers she had made overnight to a confused Shimoda. It was an announcement for a knockout competition battle with Shimoda’s Gunpla. There was also a list of prizes, which consisted of Shimoda’s treasures (or things that she thought were treasures) which she selected by sleuthing around his house.

“I already submitted the application for the battle event. You’ll have to win till the end if you don’t want to lose your precious belongings to your contestants!”

BALL was extremely lucky or was guided by the hands of fate. He rejoiced, holding one of Loretta’s flyers in his hand, on a street corner in the Dimension which she had desperately chosen.

BALL didn’t miss that there was a Golden Poly-cap on the list of prizes.