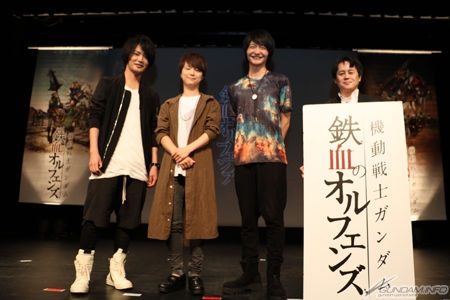 
The world premiere screening of Mobile Suit Gundam Iron-Blooded Orphans’ second season, now gaining popularity as it airs on MBS & TBS 28-affliate news network, was held on October 1st (Sat).
The event was held at 5 locations in Japan and 4 locations overseas at roughly around the same time, with the Science Museum in Takebashi, Tokyo as its center. The event began with the screening of the first episode of season two, then a talk show at the Tokyo location was held by Mr. Kengo Kawanishi (Mikazuki Augus), Mr. Yoshimasa Hosoya (Orga Itsuka), and Producer Masakazu Ogawa. Furthermore, a special event limited to members of “Gundam Fan Club”, the official fan club, also took place.
Without further ado, let’s go right into the report of the Tokyo performance that garnered huge excitement for the series.

▲At the venue, not only were the key animations on display, but also the latest items for Gunpla and other lines!


A 5 minute recap video of the first season of Iron-Blooded Orphans was shown at the start of the event. As the anticipation for season two increased, MC Volcano Ota called Mr. Kawanishi, Mr. Hosoya, and Producer Ogawa up on stage. Mr. Hosoya greeted the audience, “I’m really happy that we and the audience can be the first to watch a series that I really love together!” and was already quite excited.
Mr. Kawanishi talked about season one, reflecting on the various challenges he faced after putting to practice the advice that he received from veterans in the industry. They then talked about the period between the recordings of season one and two. Although Mr. Kawanishi was able to continue voicing Mikazuki through the radio show “Iron Flower Broadcast Station”, Mr. Hosoya had anxiously waited for the recordings for season two to begin as if he had fallen into “orphans loss.”
Producer Ogawa spoke of how, although Iron-Blooded Orphans is the 7th Gundam series he has produced, this was a series that was very much worth doing. He and the director plotted the series with the assumption that there would be a second season but it was difficult to reach a conclusion together on how they could surpass season one and revealed their hardships during the production process.
The topic then moved to the highlights of episode 1, or episode 26 of the series, of season two. Mr. Kawanishi and Mr. Hosoya both praised the arrival scene of Gundam Barbatos Lupus. The audience were unable to follow Mr. Hosoya’s comments, “Almost! Just a little longer… almost! Once I saw it, I got so excited that I wasn’t able to sleep!” As both the guests on stage and the audience’s enthusiasm rose, the event dove right into the screening of episode 26.

Mr. Kawanishi, Mr. Hosoya, and Producer Ogawa went up on stage again during the audience’s loud applause after the screening. They announced the name of a surprise guest: Mr. Nobunaga Shimazaki, voice of Ioq Qujan. The audience noisily cheered. Mr. Kawanishi then greeted with Mikazuki’s line, “I’m back, everyone” and the audience cheered, voices calling out, “Welcome back!”
Mr. Hosoya, who had watched episode 26 together with the audience backstage, was smiling irresistibly on stage and praised his friend, “Because my friend is saying these kinds of things, I’m going to cry,” “I’m not praising myself, but I can’t believe I voiced him. Orga is cool!” “Amazing! Orphans is amazing!” Mr. Shimazaki, who was a guest voice in episode 26, said, “This is a series where you can really feel how much passion, love, and effort the cast and staff put into it. Although it was only a short time, I’ve fallen quite in love with the series.”
The discussion then turned to the setting of their recording studio. The cast would predict future developments and would always discuss how to do great recordings, even at drinking parties afterwards. They revealed a time when a drunk Mr. Hosoya had loudly cried due to his happiness at the growth of the young cast and Mr. Shimazaki’s gentleness as he looked after him.
Both Mr. Kawanishi and Producer Ogawa said unanimously about the highlight of season two, “We’d like the audience to notice the increase in the strong human portrayals from season one and the increase in battle scenes.” As for character drama, there will not only be drama within Iron Flower, but also various developments within Gjallarhorn. There are various plots that the viewers can dig into, but Producer Ogawa said, “As both the mecha battles and drama has increased, I’m discussing with the director on how to finish the story within the limited time we have,” and revealed the troubles within production through his statement.
At the end of the event, each guest gave closing messages and the successful world premiere screening came to a close.


Producer Masakazu Ogawa
I would be grateful if the viewers would not only watch over Iron Flower, but also Ioq’s faction Gjallarhorn. We are doing our best in producing this work. Thank you very much.

Everyone has come together with these two, Mr. Kawanishi as the lead and Mr. Hosoya next to him, as the center. I’m also very blessed to be able to be involved in this work as Ioq Qujan at a place where everyone loves and dashes head on into their work. Please definitely look forward to Iron-Blooded Orphans and Ioq Qujan’s role. Thank you very much.

This is a wonderful work, so I would like everyone in the country to watch this series. For that reason, I’m promoting this series all over sites like Twitter, so please, everyone, lend your support. Thank you very much for today.

Kengo Kawanishi
I would definitely be happy if everyone watches Iron-Blooded Orphans in real time. Definitely please tell everyone on Twitter and other sites to “watch it in real time!” Thank you very much. 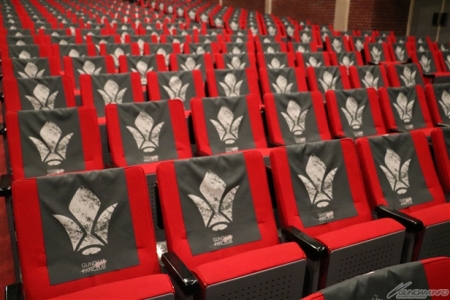 At the world premiere screening, a “Special Invite Screening for Gundam Fan Club Members” limited to members of the official fan club was also held.
At the member-only event, every seat was decorated with a fan club sheet that could be taken home and, in addition to the cast discussion screening of episode 26 at the world premiere screening Tokyo performance, a “present” convention was also held.
Additionally, the nicknames of the attendees were posted on a display panel and also printed in the “GFC Memorial Code 001” that was distributed. The GFC Memorial Code is original merchandise of the Gundam Fan Club and is only distributed at planned special events that are periodically held. It serves as proof that one participated in the member-only event. “GFC Memorial Code 002” is planned to be presented at the “ Mobile Suit Gundam THE ORIGIN Red Melody – Eve of Destiny Premiere Screening –“ which will be held on November 5th (Sat). Please join the event by all means and let’s participate in the member-only “Luxury Gundam Experience.” For more details on “ Mobile Suit Gundam THE ORIGIN Red Melody – Eve of Destiny Premiere Screening –“ please read this article. 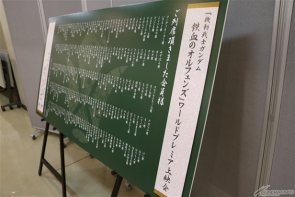 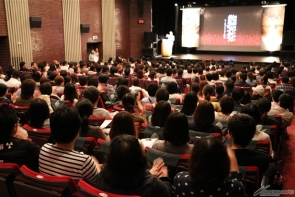 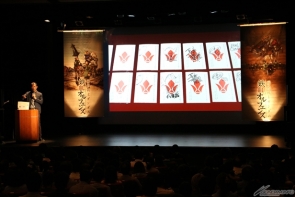 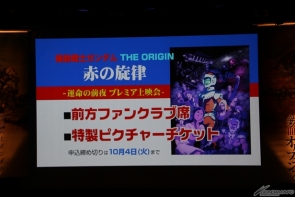