The opening feature is on episode 6 of the currently popular streaming series Thunderbolt! Mechas that appear in season two, starting with the mobile suits, will fully be made into models!

The story of Mobile Suit Gundam Thunderbolt has begun once again with the stage now moving from the Thunderbolt Sector to Earth after the conclusion of the One Year War. This season will be diving into its latter half with episode 7, which will begin streaming on May 31st as part of the 4-episode second season, and things will get even more heated as the series faces its final episode with a three-way struggle between the Earth Federation Forces, the remnants of the Zeon Forces, and the South Sea Alliance surrounding the forbidden technology “Reuse P Device.” To increase excitement through the figure-aspect of the second season of Mobile Suit Gundam Thunderbolt, the mechas that appear in the second season, starting with the mobile suits, will be fully made into models. We would like you to enjoy the world of Mobile Suit Gundam Thunderbolt through the many charming figure builds presented in every viable way from the latest kit reviews, kit modding, fully made from scratch builds and more. 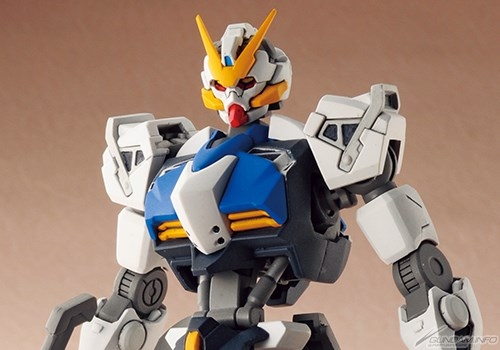 Mobile Suit Gundam Iron-Blooded Orphans Steel Moon is an official side story that takes place within the same timeframe as Mobile Suit Gundam Iron-Blooded Orphans, which depicts the origin of Tekkadan, and features a mobile suit with an unknown Gundam frame by the name of “Gundam Astaroth.” The world of Iron-Blooded Orphans will further expand with the comic serialization in Gundam Ace and the MSV prototypes and photo stories in Hobby Japan as the focal point in the product development of plastic models in the Bandai Hobby Department.
This is the story of two avenging young boys who will regain their strength, once more!! 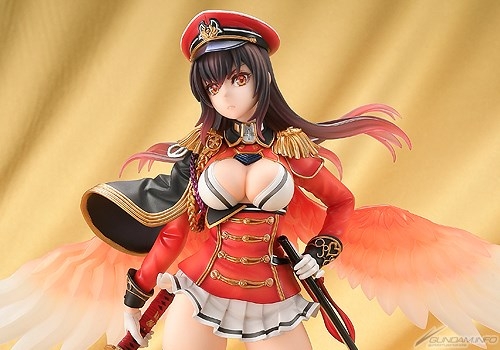 Oh, messiah candidate, the “angelic statue” of the Seven Heavenly Virtues Michael of Faith has manifested in this world. The archangel Michael’s appearance can surely be expressed with the word “divine” with her beloved sword “Ram Saint=Michel” in hand, a military uniform-clad toned body, and beautiful breasts that are freely hanging.
The meticulous Michael, drawn by the extraordinary angel artist Niθ, has been perfectly made into a model by the hands of AMAKUNI and model specialist Ken Yokota. The magnificent and angel-appropriate pedestal designed by Niθ makes this a masterpiece. 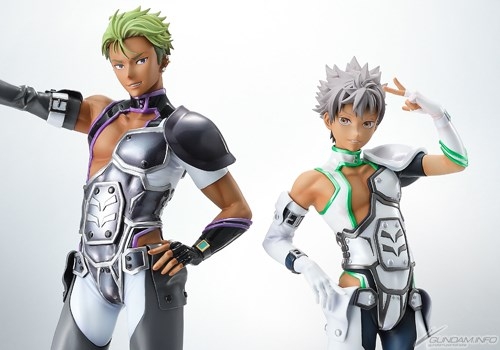 The “street charismatic” Kazuki Nishina and the “street tyrant” Alexander Yamato from the movie KING OF PRISM by PrettyRhythm are figures featuring the battle suits that they wear during dance battles.
The difference in the coloring in the materials of the armored and suit portions have been replicated in these figures. The figures aimed to achieve proper balance in color and a glossiness with sensible glimmer. They were made to emulate a sweaty appearance during a dance battle and expresses dynamism through the slight glossiness in their skin.
Kazuki was made focusing on his supple, toned muscles and the accurate movements of his fingers. Alex was made with muscles that have been trained to their utmost limits and powerful posing. They are masterpieces packed with their own respective individualities and charms, so definitely don’t miss out on them! 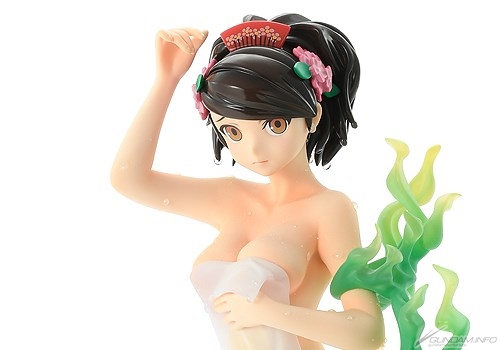 A bath scene from the supremely popular game Muramasa: The Demon Blade has been made into a figure series and the popular “Momohime” is the first installment of the – Hot Springs Ver. – series with an all-new appearance.
The figure was successfully made with original technology newly developed by AMAKUNI to appear as if there are water droplets on her skin. The concept of the figure is to express the shininess of one’s skin after taking a bath.
The way each figure is presented will differ due to each water droplet being carefully added to the figure by hand during the manufacturing process. There truly is only one of each figure in the world. It is a figure that is handmade just for you.

The extremely popular and wholesome Illya and Chloe have returned in celebration of the release of Fate/kaleid liner Prism☆Illya the Movie: An Oath Under the Snow that is scheduled to release on August 26th!
The girls have been given wholesome swimsuits altered to a SP color based on their respective post-transformation magical girl outfits with charming bottoms, modest chests, and thighs that’ll make you want to try and touch them! Like the previous figures, their skin is manufactured with smooth skin technology for a sleek touch!
This product will come with pair tickets for the movie with a limited “Magic Service” illustration of Illya and Chloe! For those that are curious, the illustration uses these figures as inspiration for the most wholesome ticket in history of Illya and Chloe! Please take this opportunity to obtain these special Illya and Chloe figures in celebration of the movie releasing!