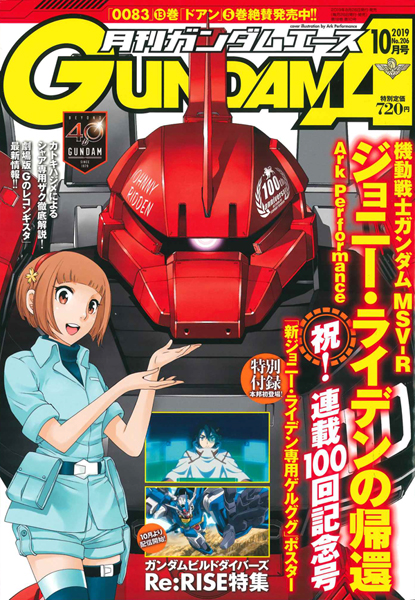 With this issue's 100th serialization, the story behind the series as heard from two people at Ark Performance is published. With the large amount of 5 pages, they discuss things such as the mechanics that appear. Also, the next issue supplement commemorates the 101th & 19th volume release! A "Johnny" special booklet is also included, so don't miss this either!

Gundam official YouTube channel Gundam Channel will feature the upcoming release of "Gundam Build Divers Re:RISE" starting October 10, 2019 (Thu). In addition to the characters and mechanics that appear, a 3 page interview with producer Takuya Okamoto is also included. The "difference" from previous works is discussed.

What is the Messala Glashtyn that suddenly appeared in front of Over.on...?

Mashiro can't hide his surprise! This is the true form of Messala!?

The only way that Ash found... Is... To take the colony to Earth... For that unprecedented plan, people are―― Dust's Counterattack begins!!

Nishi goes to the park for an athletic meet...! And, Lalah and Amuro end up encountering each other――!