"What is 'Gundam', anyway?" This simple (?) question is answered in our tenth casual weekly column just for new fans!

This week, we're knocking a brick out of the wall with a 10th super-simple column for new Gundam fans!

Part 1 was Gundam faces and coloring, and then part 2 was masked men and Haro. Part 3 was all about the Universal Century, part 4 was mobile suits, part 5 took on MSVs, and part 6 covered the "Zaku" and "GM", part 7 took on parts swapping, part 8 was an example of mobile suit R&D, and part 9 was all about the women of the first Mobile Suit Gundam series, but this week we've got one more really iconic piece of Gundam.

Just like we covered last time, Gundam isn't just about awesome-looking robots with lots of lore. It also sets itself apart with detailed, engaging stories about deep human relations. So for part 10, we're delving into the always (!?) strong, kind, and reliable "big brother" types of Gundam!

Part 1
What makes a Gundam? Reliable "big brother" types there to help the protagonists grow! 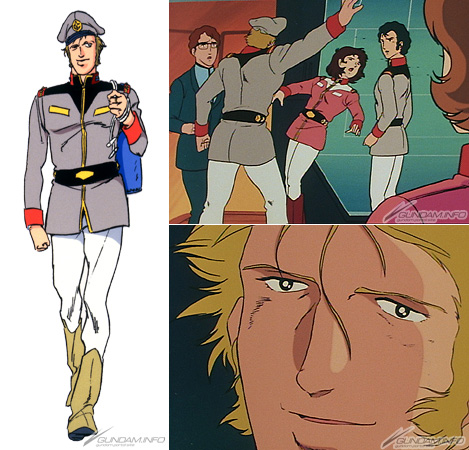 First, let me introduce Sleggar Law. Sleggar was an uncannily familiar-looking (Sly Stallone!?) Federation pilot in Mobile Suit Gundam.
An energetic man's man with a bit of Mediterranean charm, he wastes no time in trying to talk his way into Sayla (Sayla Mass) and Mirai's (Mirai Yashima) beds after his assignment to the White Base. However, he's more than just a smooth talker: he's also possessed of gunnery and piloting skills that befit a lieutenant junior grade. (He's the only character in the series to score a direct hit with the White Base's main guns in ship-to-ship combat, for example.)

Now, Sleggar may seem like just another cool big brother type, but his actions on Side 6 show another side to his character: the deadly-serious soldier who slaps Mirai when she rejects aid for the ship from her estranged fiancé Cameron.
Yet, even as their changed relationship begins to blossom into love, his reaction when Mirai approaches him is to tell her "You're too wonderful for me. You and I are worlds apart." and give her his mother's ring as a memento before sortieing on what becomes his final mission (sob.)
Sleggar remained a man's man to the end.
His last words were "It sounds sad, but this is a war." 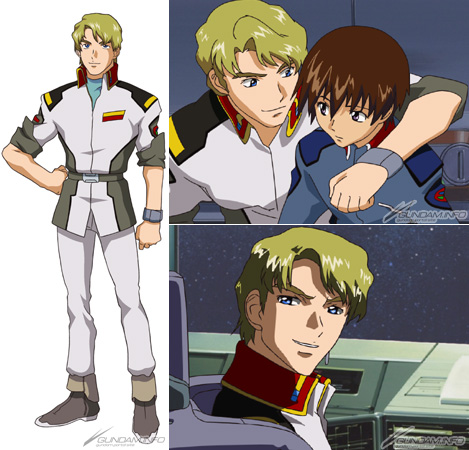 Next up is Mu la Flaga from Mobile Suit Gundam SEED. An ace pilot from the Earth Alliance's 7th Fleet, he's the very picture of a reliable "big brother", but conceals a more complicated past.

Born to an elite family and raised in the lap of luxury, family problems still left him with a miserable childhood. After the deaths of both his parents, he enlisted in the Earth Alliance military.
Stationed aboard the battleship Archangel, his amiable personality endears him to the crew and to the inexperienced young captain Murrue Ramius, for whom he is an invaluable asset.
Among this crew is the young Kira Yamato, for whom Mu is a shining example and a loving "big brother".

Also known as the "Hawk of Endymion", his preternatural piloting skills make him at home behind the sticks of a mobile armor, Gundam, or other mobile suit. Known as the "man who makes the impossible possible" to both his allies and his foes, Mu shares an unnatural sense of spacial perception with his lifelong rival and ZAFT ace Rau le Creuset, and the two can sense each other from across the battlefield.

To settle the score he carried with him throughout his life, and to protect the Archangel and his lover Murrue, he apparently dies in combat, but soon a masked man named Neo Roanoke appears among the Earth Alliance ranks... Don't you want to find out more?
The best way to know what happens is to see Mobile Suit Gundam SEED and Mobile Suit Gundam SEED DESTINY for yourself! 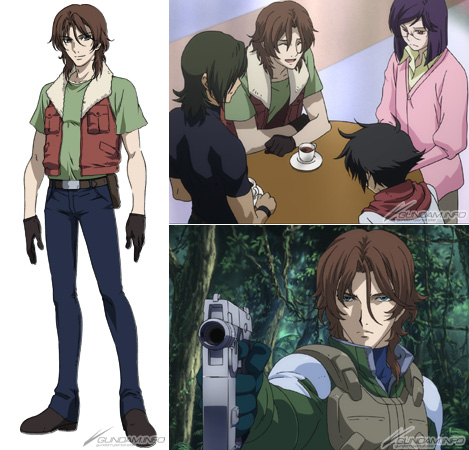 Finally there's Neil Dylandy, one of the armed group Celestial Being's "Gundam Meisters" (pilots), who appeared in Mobile Suit Gundam 00.
Born in Ireland, when he was young his family was killed in a suicide bombing by the KPSA (a guerrilla group from the Republic of Krugis.) This tragic past drove him to Celestial Being, who seek to end all war.
An experienced rifleman who at one point offered his services as a sniper for assassinations, his gifts for long-range shooting carried over to his role as a Gundam Meister. Taking the code name Lockon Stratos, he pilots the Gundam Dynames and becomes an invaluable member of Celestial Being.

Neil, the oldest of the Gundam Meisters, is looked up to by the others as a surrogate older brother; while presented as a cool, aloof character, he takes a special interest in Celestial Being comrade and main character Setsuna F Seiei. His words have a huge impact on Setsuna's philosophy of and thoughts on combat.

The conflict between his abject loathing of the terrorism which snatched his happy family life away and his own guerrilla actions to end war leave Neil conflicted, but his love of peace and of his comrades are surely greater than any other's...

Part 2
What makes a Gundam? "Big brother" types who serve as rivals and teachers! 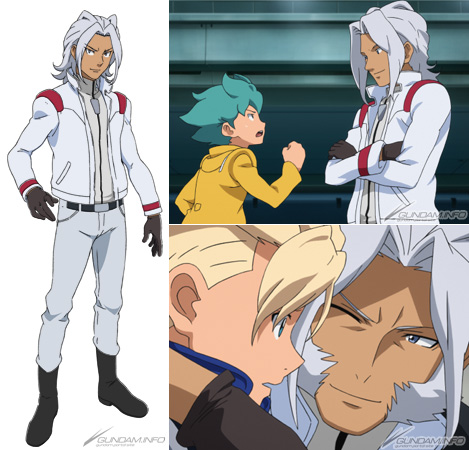 Continuing on, let's look at Woolf Enneacle. An Earth Federation ace in Mobile Suit Gundam AGE, the "White Wolf" at times looks closer to a beloved pet. (!?)
A former mobile suit racer, his desire for a worthy challenge let him to the military; with self-confidence second to none, he's a great illustration of the rival-type "big brother".
The kind of guy who can step out of a shower scene and go "lookin' great, self!", Woolf has a wild side and a lupine style best described by his insistence that he believes "only in what I can see for myself." Piloting a flat-white Genoace Custom, a (self-described) "dashing figure" on the battlefield, his narcissism is on full display.

In the first arc he manages to get on protagonist Flit's bad side by declaring that the Gundam is "his, 'cause it's painted white," but their boisterous rivalry turns ice-cold in combat against the UE. Eventually, piloting a custom G-Exes, he takes to the skies with beam sabers in both hand, his power and speed almost too impressive even for an ace.

In the second arc he returns, aged, experienced, and a better mentor. Leading the protagonist Asemu Asuno, he becomes more of a father figure than Asemu's actual father Flit, helping Asemu to overcome his worries. 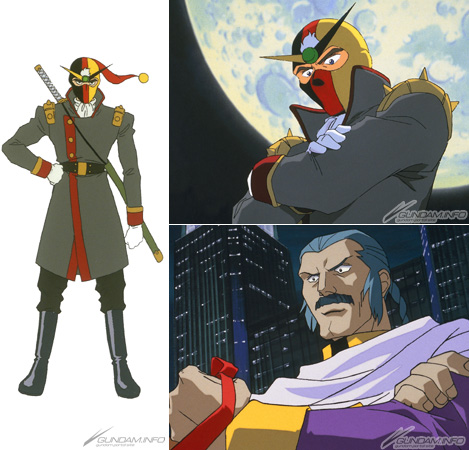 The last "big brother" we'll meet today is Schwarz Bruder. This "weirdo" (!?) in a mask and trenchcoat is from Mobile Fighter G Gundam.
Neo Germany's Gundam Fighter, he pilots the Shadow Gundam and is a master of German ninjutsu. Appearing in front of hero Domon Kasshu, he gives both him and other fighters guidance, becoming in effect a second master.

Speaking of which: Domon's first master Master Asia, whose presence is perhaps a bit too strong to be considered a "big brother", but he's one of the most memorable side characters in all of Gundam. (We'll talk more about Master Asia later...)
Even Domon himself, with his kindness to children, is brotherly... Honestly, Mobile Fighter G Gundam is just a treasure trove of big brothers.
So if you're standing up and shouting "I love big brother characters! Gundaam!" (whoops, finger slipped...) you should watch Mobile Fighter G Gundam for a show packed full of them and their manly passion!

Anyway, as we've seen this week, the "big brother" types of Gundam are vital in the growth of each show's main character.
As we continue, we'll be looking at more and more of the different roles like "big brother" that supporting characters can play.
Isn't Gundam just so fascinating to talk about?