"What is 'Gundam', anyway?" This simple (?) question is answered in our forty-sixth casual weekly column just for new fans!

A super-simple intro column for new Gundam fans is here! (You ordered the Pla Mo? Sorry, we've just got plamo.) We're back with Part 46 of what makes Gundam Gundam.

One of the most fascinating things about Gundam's mobile suits is the "all-range" weaponry that the most powerful examples use to both attack and protect every possible angle. Just the name itself screams "I don't care where you are, come at me!"


Gundam mecha with all-range attacks are... unique designs piloted by the scions of noble houses?!

Continuing on from our look at Char's Counterattack's Nu Gundam and Sazabi, here we have a rather different mobile suit and mobile fighter. 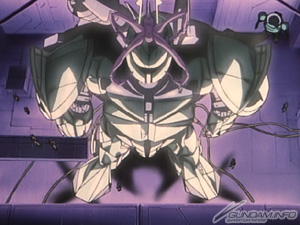 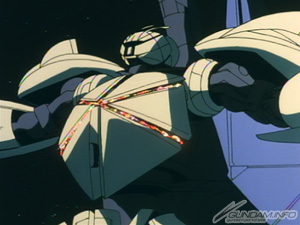 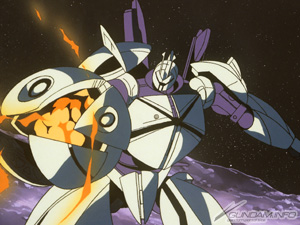 The Turn X, appearing in ∀ Gundam, is unearthed from Lost Mountain on the Moon by the private army of the Moonrace's Ghingham family. Reputed to be a relic of a culture which left to colonize deep space, its surrounding certainly resemble a particular set of ruins. (← Himiko!)

Its model number is "Concept-X 6-1-2", and it is both reactivated and piloted by Gyn Ghingham, head of his family. The Turn X is well-suited to him, with its power a good match for his military authority and its uniqueness a match for his infamous eccentricity; unfortunately, there's not enough space to go into this here, but perhaps in another column.

While the Turn X's design is strikingly asymmetrical, it's still equipped with standard weapons such as a beam rifle and bazooka; its right hand, a fusion cutter-equipped manipulator, also houses triple beam emitters and wire claws. Most crucial, of course, is its all-range attack functionality, achieved by splitting the entire suit into nine pieces, of which every segment but the head (the X Top) acts as an independent beam weapon platform.

This system is equally useful for evasion, escape, and to corner an enemy; we're talking a level of versatility that normally comes with an "As Seen on TV" label. (← And, for just three easy payments of—) Call now, and we'll throw in the Moonlight Butterfly system, wonder nanomachines guaranteed to destroy all technology on Earth! (← wait, isn't this the scariest thing about it)

Anyway, the Turn X isn't just amazing for its offensive capabilities. Its most amazing feature is its nanomachine-based ability to repair even fatal damage!

The X-shaped scar on its chest is a remnant of an earlier clash with the ∀ Gundam, and their fates continue to intertwine; in the end, both it and the ∀ activate their Moonlight Butterfly systems and disable each other in combat, before falling to Earth where their pilots (inexplicably) duel with katanas.
Its, erm, uniqueness—both in its abilities, and in its pilot's proclivities—is the charm of the Turn X. 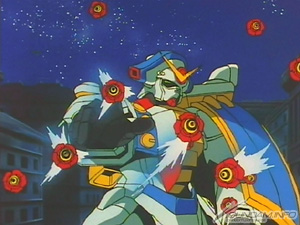 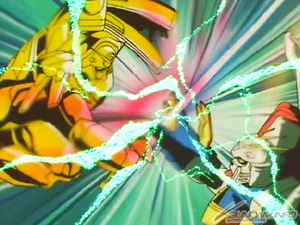 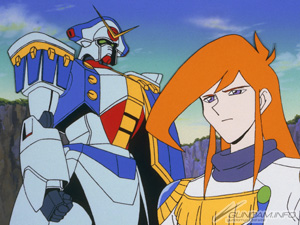 Next is Gundam Rose, cutting the dashing image of a chevalier with its cape-like shield over its left shoulder. (GF13-009NF) Don't you just want to take that cute little Napoleon hat (← bicorn?) off and roll it up?

The Gundam Rose, Neo France's entry in the 13th "Gundam Fight" which decides political supremacy among the colonies, is piloted by the even more stereotypically French George de Sand.
Heir to the famous Sand line, his prowess as a member of the Shuffle Alliance is matched only by his florid mannerisms and fabulous fighting suit—but, of course, to give a full account of the young nobleman would take longer than we have here today. Perhaps another time? (← wait, didn't I just say that?)

Both man and machine are overflowing with French esprit, and the Gundam Rose, a melee-focused design, fights its duels with the traditional fencing sabre.

However, its strongest weapons are its rose bits, bits in the shape of rosebuds. While capable of striking from afar as all-range weaponry, these bits can also trap the enemy in a unique energy field or strice directly.

A signature technique is the Rose Screamer, where rose bits enclose the enemy on four sides and perform an electrical shock attack (though in this mode, destroying one bit sets off a chain reaction in the others...) There's also the Rose Hurricane, where rose bits spiral around an enemy, trapping them in a tumultuous flow of energy. The result of George's training in the Guiana highlands (!?), and only achievable when he enters a state of complete zen, it unfortunately isn't enough to take on protagonist Domon. (Even though it seemed to work at first... What a pity.)

In any case, young George's mount as the champion of Neo France is a wonderful mobile fighter which blends traditional design with cutting-edge technology.

And that's our second look at Gundam's all-range weapons!