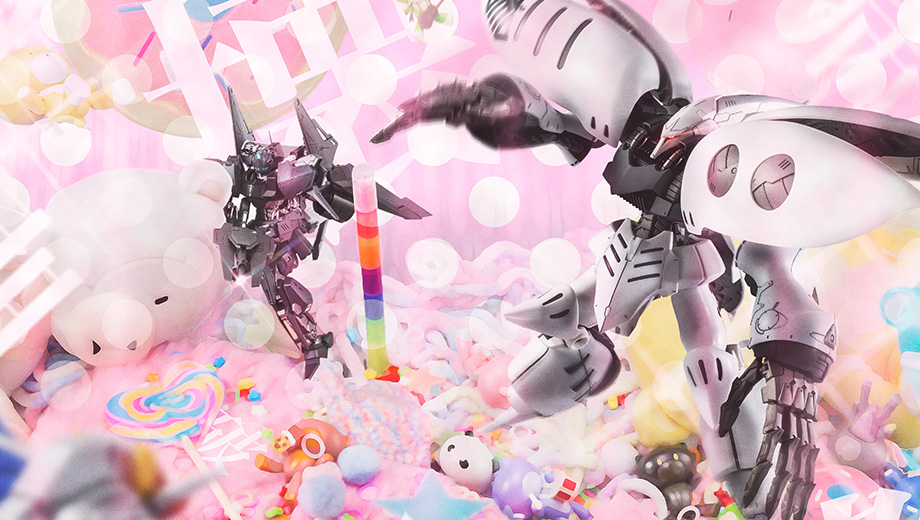 “Who knew that Golden Poly-caps were perfect for picking up girls? They’re awesome!” GIMM was overwhelmed with joy and victoriously clenched his fist while BALL raised his arms to the heavens.
“I’m sorry for saying I was going to turn you into accessories!”
Despite the underground model mold mafia being distressed about the two on the other side of the planet or some unknown place, being distressed about the two, GIMM and BALL had completely forgotten about the organization and were basking in the joy of being asked out for a Gunpla date by two girls beautiful enough to be idols (and who actually were outside of GBN), feeling truly alive.
“So NOZH is the one with the short bob and Markie is the one with long black hair...”
Before leaving, NOZH ran back to the two, telling them, “I forgot to give you this!”
before exchanging contact information with them. BALL opened up a window and stared at their profile pictures (this was also part of NOZH’s plan).
“NOZH is a lovely girl...”
“Markie is, too. She doesn’t seem to be that talkative, but her subjective stance makes her interesting.” GIMM reminisced about Markie smiling toward him when NOZH ran back to her.
“If only Viola was like that…” he muttered while comparing his fiancee/cousin.
“Who’s Viola?”
“None of your business. By the way, we now have their contact info. Wouldn’t it be gentlemanly to send them a thank you message or something?”
“That’s quite thoughtful for you, GIMM!” BALL immediately opened up a message window to type but recalled something.
“By the way,” he stopped his fingers. “I think I’ve heard NOZH’s voice before.”
“How many times do I have to tell you that they’re not curry or stew?”
“Curry roux… Petit Rouge! … No, it’s not that… I think I’ve heard her voice somewhere else... ”
“I’m so thrilled to see you tomorrow!”

NOZH seemed utterly disgusted while swiping through her keyboard on the message window as she sat on a sofa in the living room of the penthouse of her Force Nest with her legs crossed. Markie had a fever and was sleeping.
Although there were a few amusement park Dimensions in GBN, they had to wait a couple days to reserve them even for their earliest option. That couldn’t be changed by paying additional Force Points even though they had more than enough Force Points obtained through extortion. But their main problem was the messages that came from the two young men.
They were sending over a thousand messages every single day.
But they had to keep them content to seize the Golden Poly-caps. NOZH and Markie split up the task to respond to the messages, but it was too much work for Markie, who usually only replied to about only one out of ten important messages from her manager.
“How much free time do these imbeciles have? So disgusting…they’re going down…” Markie complained.
NOZH mumbled, “We just have to wait until we have the Golden Poly-caps. We just have to wait until we have the Golden Poly-caps...”
She muttered to herself while smashing her finger onto the window, adding a heart sign at the end of her response.


The Ferris wheel, roller coasters, merry-go-rounds, coffee cup rides, and even the colorful and cute attractions and activities were large enough for Mobile Suits.
“What a place!”
GIMM was awestruck while GIMM asked wonderingly, “But why isn’t there anyone else in this amusement park Dimension?”
“We’re super lucky! No one will get in the way of our double date, and we won’t have to worry about anyone seeing us do all the happy things we want to. But did you really have to come here on that, BALL?”
The ‘that’ which GIMM referred to was the Polypod Ball.
It was BALL’s Gunpla which had its 180mm Cannon destroyed during the assault of the mysterious Qubeley at Shimoda’s Force Nest. The Polypod Ball stood beside the Gundam Storm Bringer, now with a gigantic speaker on its head.
“I was devastated for a while after I lost the 180mm Cannon and it felt like I was actually hurt..."
“Was?” Asked GIMM.
BALL went on. “But now I feel that I was given the precious opportunity for
trial and error to think of my own new battle style.”
“Well, I think it's a bit too new and focuses too much on error more than trial.”
“I admit that I’m still lost in my journey to complete my Gunpla, but I also think that I’ve reached a certain degree of completion.”
“I don’t know what you’re talking about, but can you stay away from me? I don’t want NOZH and Markie to think I’m the same kind of person as you.” GIMM said while taking a step away from the Polypod Ball in his Gundam Storm Bringer before sensing something heading his way.
“Markie! NOZH! This is an awesome amusement park!”
He tried to say as he turned around to the two girls, but...
“What?!”
The Gundam Storm Bringer took a step to barely dodge an unbelievably high output beam that flew across the place where it was standing.
“...What was that?”
GIMM blurted out with surprise.
BALL sensed another presence and looked up into the sky to see...
“A Qubeley!?” BALL exclaimed, seeing that it was the exact same Qubeley that had ripped the Polypod Ball’s 180mm Cannon.
The Polypod Ball and Gundam Storm Bringer reflexively jumped out of their positions and the Qubeley instantly descended, gouging out the ground where the two were standing a moment ago.
Inside of the Qubeley which stood before them, NOZH was also as surprised as GIMM and BALL by two things.
“Isn’t that the disgusting bug I saw!?”
The other thing was, “... Markie missed...?”
Both sides faced each other dumbfounded when BALL noticed, “The trajectory of that beam…it wasn’t from the Qubeley that came from above.”
He frantically shouted to GIMM. “There’s another Gunpla!”
“What?!”
GIMM and BALL quickly jumped to change their positions.
The next moment, another beam barely grazed them.
The Hyaku-Shiki Crash aimed its rifle in its usual kneeling pose within a storage space for construction materials far from the amusement park. Markie quietly clucked her tongue. She was also slightly shaken by the fact that she missed and her feelings affected her precision.
She was supposed to stop her prey with a single shot, have the Qubeley Damned pluck off the arms and legs with its claws, and extract the Golden Poly-caps that would be used in the joints.
She wanted it to end as soon as possible because...
“What’s your problem?!”
GIMM’s voice came into the Hyaku-Shiki Crash and the Qubeley Damned’s cockpits.
“Don’t mess with our date party!”
NOZH was about to make a vulgar exclamation but noticed something.
“Oh, so they don’t know who we really are!”
NOZH desperately changed the settings of her open radio communication line to Force closed settings. “We’ll deal with that disgusting bug later! We’re going for that pesky Gundam first!”
“Roger.” Markie took a big deep breath and took aim with her sniper rifle again, pulled its trigger, and fired.
Her aim was even more precise, and its output was still alarmingly high. However…
“Seriously! What’s wrong with you? You’re disturbing our happy little party!”
GIMM’s obsession with his ‘party’ surpassed Markie’s marksman skills. Once he knew he was the target, he hid in the merry-go-round with incredible maneuvers, and when the merry-go-round was destroyed by the beams from the Hyaku-Shiki Crash’s rifle, he hid behind the coffee cup rides.
The Qubeley Damned came to stop the Gundam Storm Bringer, but the Polypod Ball interfered by blocking its path. BALL’s obsession was as bad as GIMM’s.
“I’m going to have a good time with NOZH and Markie, and I’m not going to let you get in our way!”
His passion took over the maneuvers of the Polypod Ball.
Markie clenched her teeth even harder while NOZH’s toxicity thickened.
“What is their problem?! They’re about to make me puke!”
Despite this, the Hyaku-Shiki Crash’s intense sniping and the Qubeley Damned’s sharp claws shredded down places to hide, giving GIMM and BALL no chances to retaliate, so they came to a conclusion.
“That theme ride dome’s the only place left to hide! ”
“That’s our only option! We’re gonna charge, BALL!”
“But we’ll run out of hiding places!”
“We’ll be fried or diced if we stay here! Changing the situation might change the flow of this fight!”
“Got it!”
Seeing the Gundam Storm Bringer and Polypod Ball heading toward the dome, Markie and NOZH seemed relieved and smirked.
“Yes…the flow will finally change.”

GIMM and BALL fled to the dome and were overwhelmed by what they saw. It was an attraction with the theme of fancy and cute candy. It was mainly pastel pink with colorful candies and macaroons, along with monuments of the amusement park mascots that filled the room.
The Qubeley Damned followed them in.
The Gundam Storm Bringer instantly aimed its rifle, but it was flung away by a beam. It was from the Hyaku-Shiki Crash that also flew in.
GIMM and BALL were doomed.
NOZH and Markie were victorious.
”Hee...hee hee hee...”
NOZH began laughing cheerfully.
Markie also started laughing.
”Haha...hahahahaha...”
The Qubeley Damned and Hyaku-Shiki Crash burst into dances.
It was as though it was a bizarre sabbath had begun.
“Heehee! Heeheeheeheehee!"
“Hahaha...hahahahahaha...hahahahahahahaha!"
Suddenly, they heard something.
NOZH and Markie came back to their senses.
“BALL?”
GIMM was startled and glanced at the Polypod Ball with a puzzled look. A song came blaring from the gigantic speaker sitting in the Polypod Ball’s head. It was BALL’s favorite song and Petit Rouge’s most popular song.
NOZH and Markie had stopped laughing and froze.
“I’m not giving up.” BALL shouted desperately.
“I love this song. It’s like Nozomin and Mayuyun have taught me something important...so I’m going to enjoy my Gunpla date with NOZH and Markie no matter what!”
“BALL…!” GIMM was moved by BALL’s words.
“NOZH, we’ve also forgotten something important too!”
“...I know. We have to go back now!”
NOZH and Markie had a quick conversation which couldn’t be heard by GIMM and BALL. The Qubeley Damned and Hyaku-Shiki Crash suddenly turned around and left. The sound of their thrusters going at maximum speed from outside the dome gradually faded away.
GIMM and BALL looked at each other from their cockpits in awe.

“You’re late, Nozomin! Mayuyun!”
“The fans are gonna start a riot if they find out that you guys aren’t at this performance!”
The other Petit Rouge members were waiting anxiously, while NOZH and Markie slightly stuck out their tongues and said, “...sorry.”
“We’ll put on our make-up and change into our costumes!”
“Don’t mind the make-up! Just hurry up!”
The manager was furious. The two replied with a cheerful “Yes, sir!”, but they knew that they only had to endure until they got their Golden Poly-caps. They looked at each other and shrugged before quickly changing into their little red riding hood stage costumes.
They could hear the cheering of the fans waiting for the show to start.
The fans were calling for Nozomin and waiting for Mayuyun.
The two suddenly recalled BALL’s desperate shout.


GIMM and BALL were still waiting in the devastated ruins that used to be an amusement park. They didn’t know how much time had passed.
“NOZH and Markie are really late...”
“Yeah...”