With 51,215 Votes Cast, Here Are the Results of the “Who’s Going to Wear the GUNDAM Café Uniform?!” Poll!

Find out who has been chosen out of fifty characters! 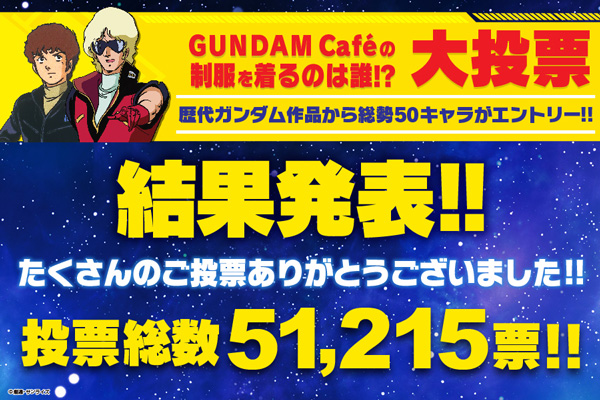 We have published the results of the “Who’s Going to Wear the GUNDAM Café Uniform?!” poll that we held at all locations of GUNDAM Café, Gundam’s official café, from Friday, May 28th, to Wednesday, June 30th.

We will create new merchandise and novelties using illustrations of these four characters, plus Amuro Ray and Quattro Bajeena, wearing the GUNDAM Café uniform, as well as new menu items inspired by each character. Look forward to more news in the future!

Moreover, we have the election posters for all the characters up on the GUNDAM Café official website as a way to thank everyone who has cast their vote. Whether the character you voted for was chosen or not, make sure to check them out!