Kanata Hongo was chosen as the Building Ambassador for GUNPLA’s Fortieth Anniversary! 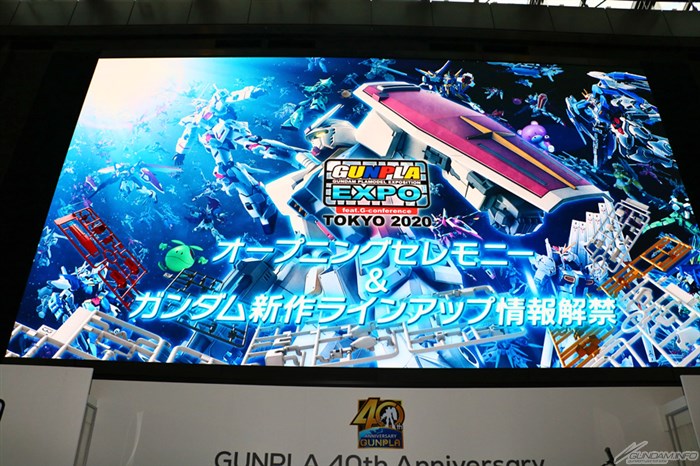 On Thursday, November 12, the Opening Ceremony and the presentation of the new Gundam lineup were held at the GUNPLA EXPO TOKYO 2020 feat. GUNDAM conference event, currently being held at Sankaku Hiroba, Shinjuku Sumitomo Building, Tokyo.
Along with the greeting by Hirotake Taguchi, the GUNPLA Fortieth Anniversary General Producer from BANDAI SPIRITS Hobby Department, a ceremony was held to appoint the Building Ambassador for GUNPLA’s Fortieth Anniversary.
Actor Kanata Hongo, who will be the Building Ambassador for GUNPLA’s Fortieth Anniversary, expressed his joy saying, “Congratulations on reaching GUNPLA’s fortieth anniversary. I feel honored to have been chosen for this role in such an important year. I’m really happy to be involved with my beloved GUNPLA. Building GUNPLA has many positive sides, so as a Building Ambassador I would like to let as many people as possible know about them.”

Next, Naohiro Ogata, SUNRISE Producer, announced the new works Mobile Suit Gundam Hathaway and SD Gundam Heroes, and reported that Gundam Build Fighters: Battlogue would start today, Friday, November 13.
Furthermore, Kanata Hongo, comedian Teruyuki Tsuchida and TV personality ROLAND appeared for the guest talk.
Hongo talked about how he met GUNPLA, saying, “My family bought me an SD Gundam GUNPLA when I was in elementary school, and that was the first time I built one. That means I have a twenty-year experience in building GUNPLA. It’s fun to see how they evolve in time.” When asked about how many GUNPLA he has at home, he replied, “I have about one hundred completed ones. I have as many GUNPLA on display as the space allows.” Tsuchida snapped back, “You’re the truest fan of them all!”

Tsuchida recounted an anecdote, “When I was in the second grade, an older boy in my neighborhood told me that there was an interesting anime called Mobile Suit Gundam and they had amazing plastic models. They had three boxes of Zaku at the local toy store, so I rushed home and ran back to the store with three hundred yen in my hands, but I was shocked to see that they’d sold out in ten minutes or so.” He revealed that he became a GUNPLA fan thanks to the first models he bought, a 1/144 Gundam and a 1/144 Gouf.

When asked which Gundam series left the strongest impression on them, they replied, “I’ve seen Mobile Suit Gundam Unicorn dozens of times. I could recite every line from all of its seven episodes. I like episode 4 the most.” (Hongo), “I gave my child the name of a The 08th MS Team character.” (Tsuchida)
ROLAND started watching Mobile Suit Gundam thanks to this opportunity, and said, “Since this series is from forty years ago, I thought it would be a simple story about fighting against evil, but I was impressed to see that the storytelling was very deep, with themes such as the ups and downs in the feelings of the young soldiers or environmental issues.”
When the newest GUNPLA, including HG Xi Gundam and Wukong Gundam (tentative name), were introduced, they commented, “I like the unique silhouette of the Xi Gundam.” (Hongo), “I think my son will buy these as soon as they’re out.” (Tsuchida)
Moreover, Hongo was very impressed with the life-sized Beam Saber and Shield on display in the venue, and jokingly said, “So that’s what Daguza felt in Unicorn when Sinanju’s Beam Axe slashed him…”
Tsuchida made the audience laugh when he referred to the GUNPLA handed out as presents to visitors, saying “They’re different every day. Does that mean GUNPLA fans will come every single day?”, and ROLAND revealed that he took photos at the photo spots and that he once attempted to build a two-meter giant GUNPLA.

In the end, the curtain fell on the opening ceremony with a comment from each guest.

ROLAND
This was my first chance to get acquainted with Gundam. Even people like me who aren’t originally Gundam fans will surely fall in love with this series if they just watch it. I want to learn more about Gundam.

Teruyuki Tsuchida
There are so many types of GUNPLA, and I think that even people who don’t know Gundam can find them really cool. I want people who’ve never built one to give it a try. There are ones geared towards beginners as well as detailed ones for expert builders, so try building a GUNPLA and see how deep that world is.

Kanata Hongo
I had a lot of fun today. Thank you! I really love GUNPLA, and BANDAI always creates new GUNPLA that go beyond the expectations of GUNPLA fans! I’m sure they will keep on evolving, so I’d love for you to always be into GUNPLA. As I’ve been chosen as the Fortieth Anniversary Building Ambassador, I will do my best to let people know about the beauty of GUNPLA. 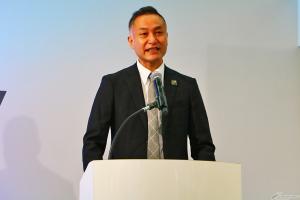 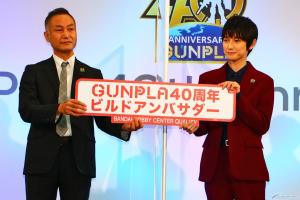 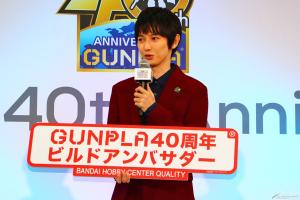 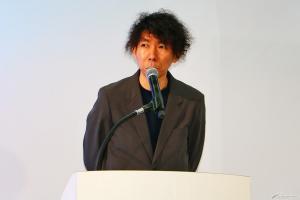 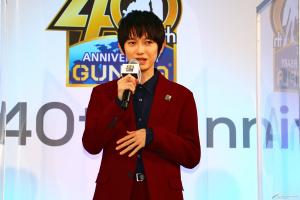 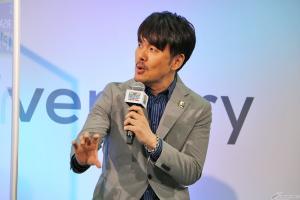 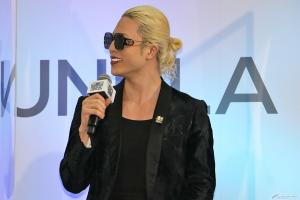 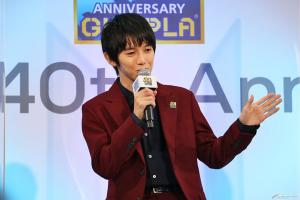 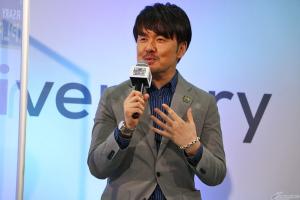 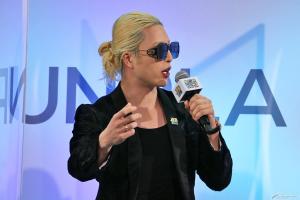 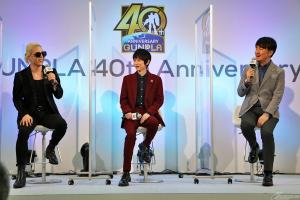 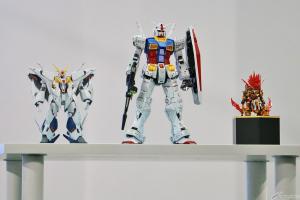 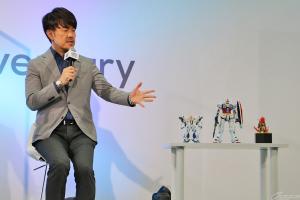 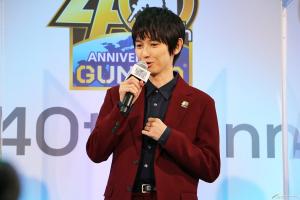 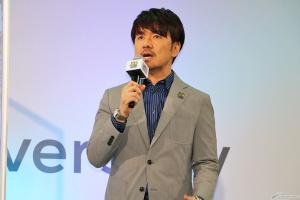 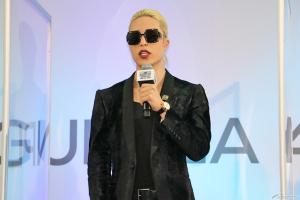 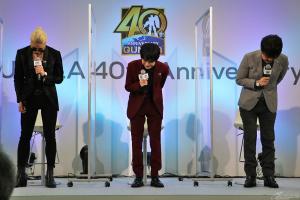 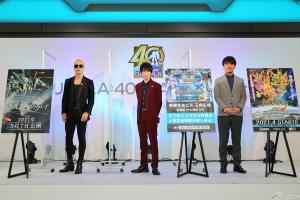 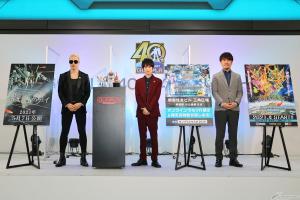 (Gundam Info Editorial Department)
Clipping functionality is only for members. 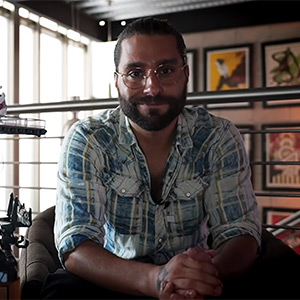