Natsuki Hanae appears as a surprise guest! The answers to the Iron-Blooded Love Quiz are revealed! 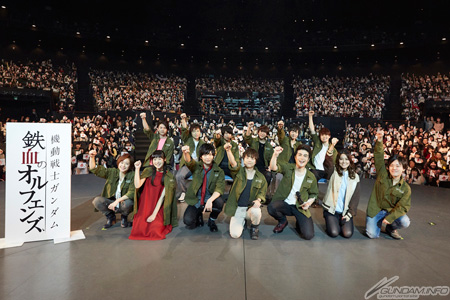 The event was held twice; once in the morning and once in the afternoon. The event had a large variety of activities such as a live voice drama of renown scenes acted out by the entire 15-member cast alongside a live musical performance by musical director Mr. Masaru Yokoyama. The first half of episode 35, “Awakening Calamity,” was also shown ahead of its broadcast the next day and the answers for the “Iron-Blooded Love Quiz,” carried out alongside the event, were revealed.
The Gundam Info Editorial Department accessed the event’s first performance. Without further ado, let’s look at the hugely successful event. 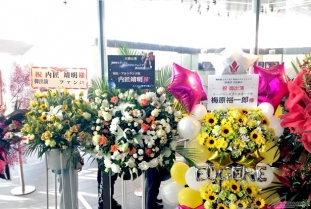 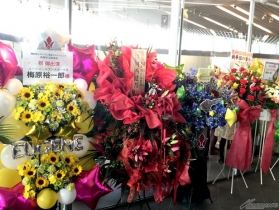 ▲ Flowers gifted to Tekkadan and the cast from fans and the like were lined up in a row in front of the entrance inside the venue! 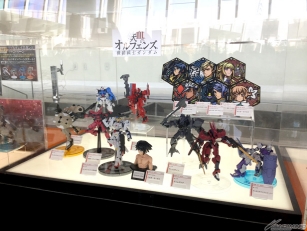 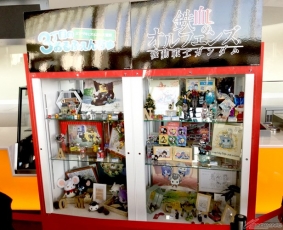 ▲ The latest Gunpla and merchandise were also on display! 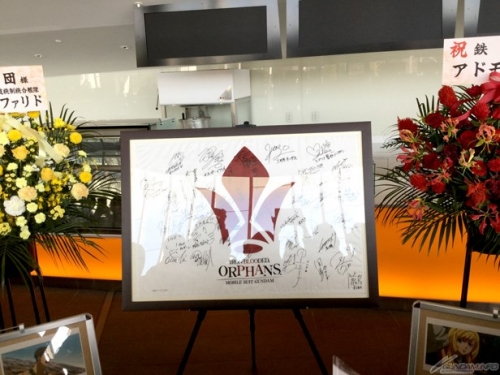 ▲ A panel adorned with Tekkadan’s symbol was signed by the voice cast!

Just before the event began, a list of precautions was read aloud by Hash Midey and the lights went dark as the guests appear on stage one after the other. Each character excites the audience with their respective lines. A transmission suddenly comes from Mars and, at Orga Itsuka’s signal, “Right? Mika!” Mr. Kengo Kawanishi, voice of Mikazuki Augus, appears in the middle of the stage. The event begins with his famous line, “Hey, Orga, what should I do next?” 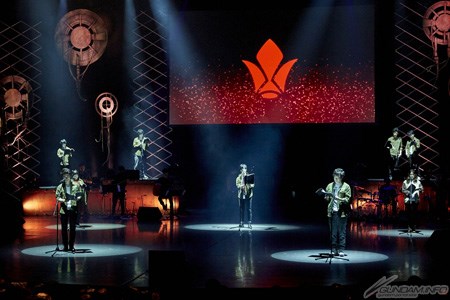 The opening begins with a live performance of the 1st season’s main theme song, “Mobile Suit Gundam: Iron-Blooded Orphans,” and renown scenes from the series appear on the screen. The voice cast then breathe life into the scenes as they begin to voice their character’s live, pulling in the audience with both impactful music and a performance overflowing with ambiance. 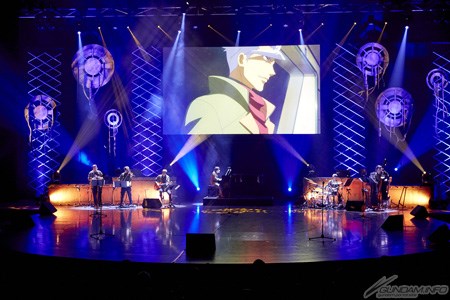 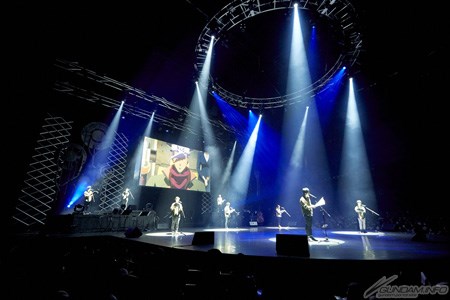 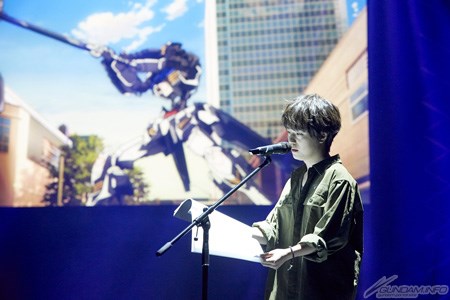 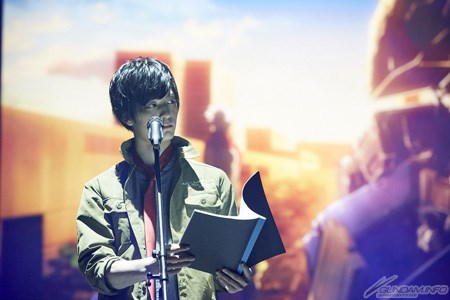 The live voice drama continues even as the soundtrack performance cuts into their lines. They go into the scene where Mikazuki goes to call Biscuit during episode 23, “The Final Lie,” and Mr. Natsuki Hanae appears on stage as a surprise guest. He earnestly performs as Biscuit, conveying his determination with, “I won’t quit,” and induces tears from the audience.
Mr. Masaru Yokoyama’s musical performance begins to play again and the voice drama ends with a scene from episode 31, “Silent War,” as its last scene. 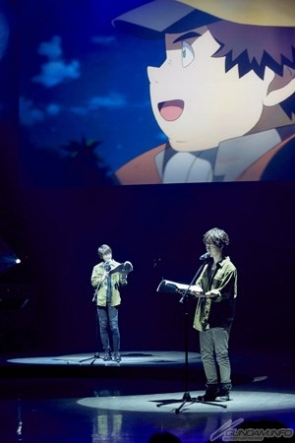 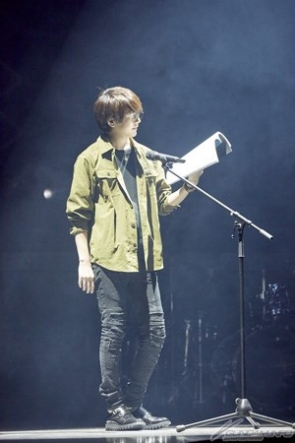 The advanced showing of episode 35, “Awakening Calamity,” then begins and, just as expectations are building up, the episode ends halfway. As the audience is filled with curiosity as they speculate what may happen next in the latter half of the episode, the voice cast appear on stage once again and briefly introduce themselves. Mr. Natsuki Hanae, voice of Biscuit, introduces himself and says, “Biscuit is everyone’s mother,” causing laughter amongst the audience.
A special video message then arrives from Mars with a comment from Mr. Yoshimasa Hosoya, voice of Orga Itsuka, “My friends, I’m happy that you can see how great the relationships are within the Tekkadan voice actors group.” His message is one that transmits how great the mood is between the cast, their leader included. 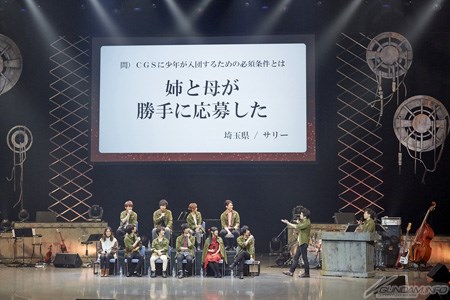 The self-introductions then end as the next corner, the revealing of the answers to the “Iron-Blooded Love Quiz,” begins.
Here, Mr. Yasuaki Takumi, voice of Akihiro Altland, and Mr. Taishi Murata, voice of Norba Shino, are tasked with being MCs and begin the corner. The correct answers to the quiz, previously available through the official website, are announced alongside interesting answers that were collected from the quiz-takers. 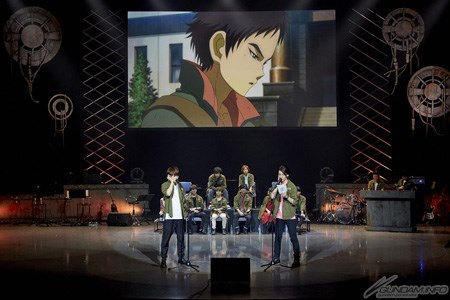 The voice cast also challenge the quiz and reveal their answers. At the question, “What did Aston feel when he saw Chad in his uniform?” Mr. Kouhei Amasaki, voice of Takaki Uno, and Mr. Kentarou Kumagai, voice of Aston Altland, reenact the correct scene live. Mr. Amasaki then contemplates the question in his own original way, “What would Takaki think?” and answers, “For Fuuka to be happy.”

Once the answers for the quiz are revealed, the latest information and model sheets are then revealed for “GUNDAM FLAUROS.” The suit appears for the first time in the episode shown ahead of its broadcast, “Awakening Calamity.”
The artists that will sing the theme songs of the 4th cour of the anime are then announced. It is revealed that the opening song, “Fighter,” will be sung by KANA-BOON while the ending song, “Freesia,” will be sung by Ms. Uru, causing loud cheers of joys to erupt from the audience.

Once the latest information is revealed, the event at least reaches its ending.
Here, Mr. Masaru Yokoyama, who had performed a huge number of songs from the soundtrack, is called up on stage. He comments, “Although I compose songs, I never thought that I would perform them myself. Today was very fun!” and the venue fills with applause.
A commemorative photo is taken of both the guests and audience together and final comments were made. Their comments included, “[our comments] will be uploaded on the official twitter word by word without missing a thing,” causing the audience to be filled with laughter at the casts’ clumsy comments. Mr. Kawanishi, voice of Mikazuki, said while holding back tears, “I am so happy by the fact that Orphans is receiving love from so many people. As we approach the end of the year, I believe the broadcast will progress into a turbulent story…” He then comments, “Please continue to love and support Orphans!” and the event is brought to a close. 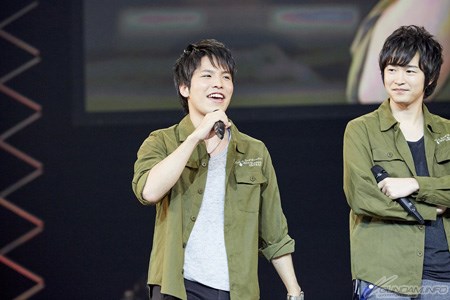 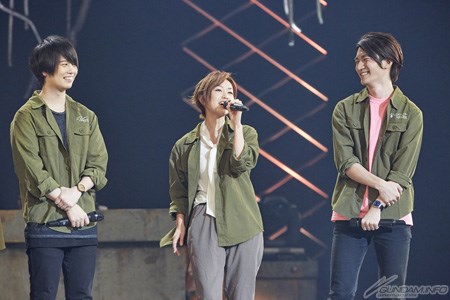 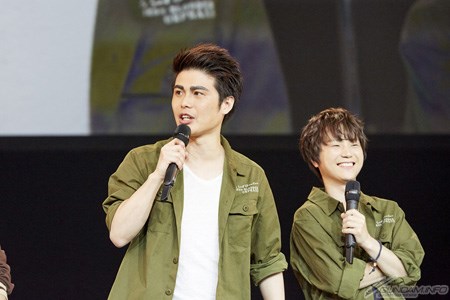 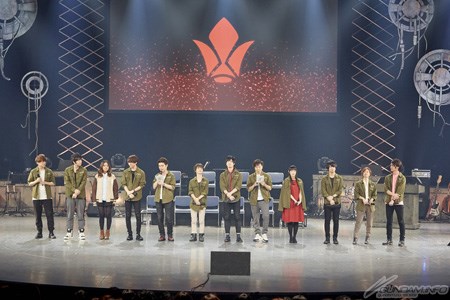 With the new theme songs decided, the story development from now on will make one unable to take their eyes off Mobile Suit Gundam Iron-Blooded Orphans . A Screening to reflect on the series will be held on January 13 th (Fri) while 「Tekkadan FlagConnection Two」 a commemorative event celebrating the first releases of the Blu-rays and DVDs of season 2, will be held from February 26 th (Sun.) Definitely please check them out.