The work of the Japanese representatives are the best in the world! “Gunpla builders world cup 2016”, world tournament finals – report on the awards ceremony!

The 24 works that won the strenuous battle are all together! At the Gundam Front Tokyo, out for display until January 6! 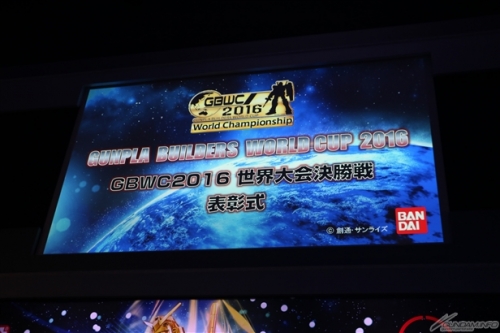 The world tournament finals of the Bandai official gunpla works contest “Gunpla Builders World Cup 2016” was held on December 18, at Tokyo’s Odaiba “Gundam Front Tokyo”. In the venue, participants from 20 cities across 13 countries took part in the deciding match. The 24 works, 11 from the junior course and 13 from the open course, were assembled in one place. One of the welcomed guest judges is the mecha designer Ebikawa Kanetake. Each course’s first to third place will be chosen and honored with a special award by the organizing committee.

First, the host for the event was, yet again, Bandai Hobby’s Kawaguchi Katsumi, under the pseudonym of “Kawaguchi Meijin” and the voice actress Ikezawa Haruna. Once again, the opening talk was held, and they explained the tournament’s overview.
Furthermore, as a sponsor’s greetings, the Bandai Chief Executive Officer, Kawaguchi Masaru, commented with, “This year has seen an increase of extremely creative works, more than the usual. Among them, there were works that were clearly Gundam, but others had a perfect “art work” feeling to them”.

Now, we finally move onto presenting the winning works. After that, there is a straightaway introduction to each of them and a comment.

■Special award by the organizing committee 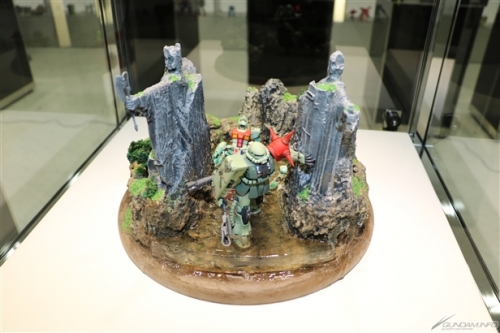 “A splendid work, that carefully expresses the meticulousness of the details, like the movements on the water’s surface, while separating the world view of Gundam that aren’t from the main story, such as Zaku and GM. (Seven Eleven Japan) 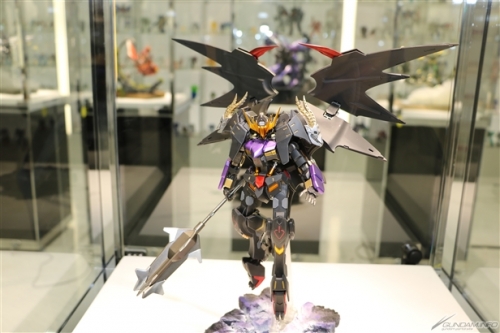 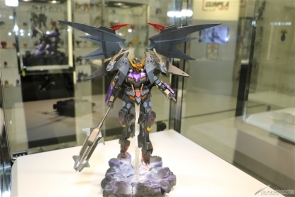 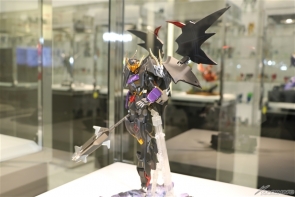 “Even though the basic idea is a simple arrangement of parts from the “Gundam Deathsythe Hell” over a “Gundam Barbatos”, the colouring and the composition of the additional parts is beautiful, besides improving the evil image of it all. If this was remade in “Gundam Breaker 3”, it would be great to give it a play.”
(Bandai Namco Entertainment) 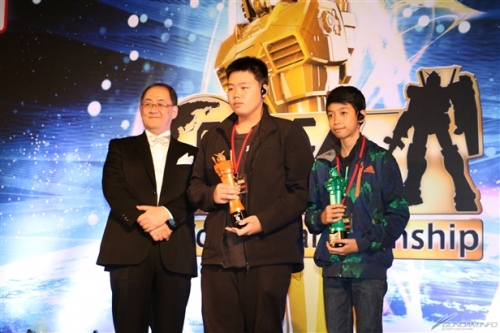 ▲From the left, Kawaguchi Meijin, Benny Ma and Christian. 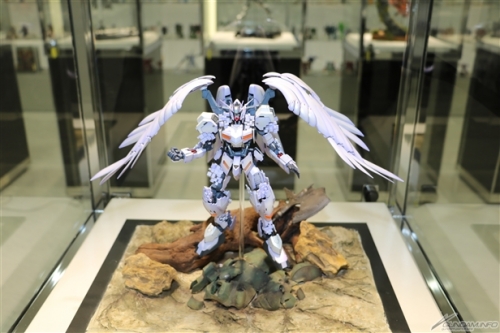 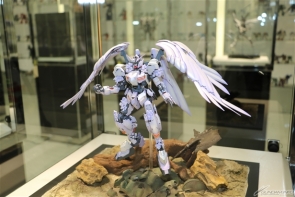 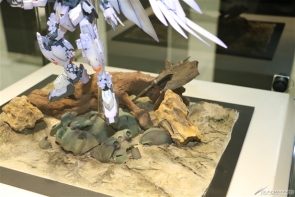 “My son couldn’t come to the meeting, but I’m sure he’s happy he was given this opportunity.” (Wong Yuen Sing Julian’s father)

“As the title Reborn implies, the model seems to have had its body reconstructed. The idea, by which the dot moulding is disposed in each part, the original basic work and the crafty colouring got this work the potential for a third place.” (Bandai Hobby Operations Deprtment, Yasunaga Akihiko) 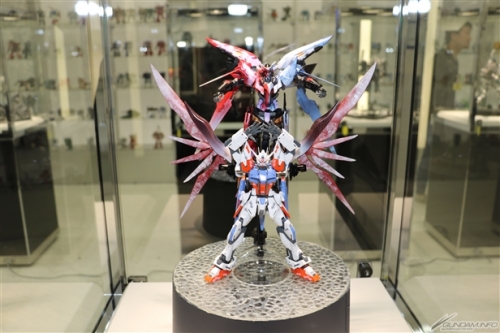 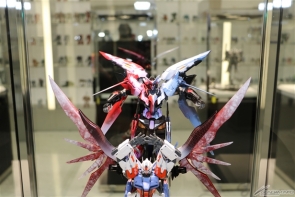 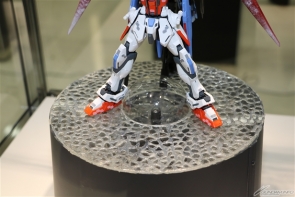 “When they announced the Japanese champion, I was worried and nervous whether I was really good for it, but now (as a second place), I’m happy with the result. Thank you.” (Fujimoto Takuma)

“He used a good original MG (master grade) from Build Fighters Series 2, but thanks to a careful handicraft and an exceptionally personal coating, many parts reached exceedingly high points by using the masking and various other things. After talking with his father, he created a very effective base too.”
(Hobby Japan Editorial Department, Chief Editor Kimura Manabu) 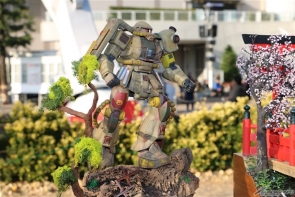 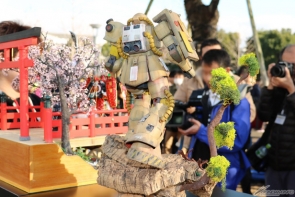 “I want to thank my teacher and both my father and older brother, who accompanied me here.” (Chiu Hsien Chun)

“The coating and crafting technique’s care made this an overwhelming discovery in the Junior Course. However, not just that. For example, on the Weathering you have a beautiful head but legs that get heavily dirty, while the coating fades. It’s concerned details like these that made it extraordinary.”
(Model Graphics Editorial Department, Editorial Chief Furuya Tomoyasu) 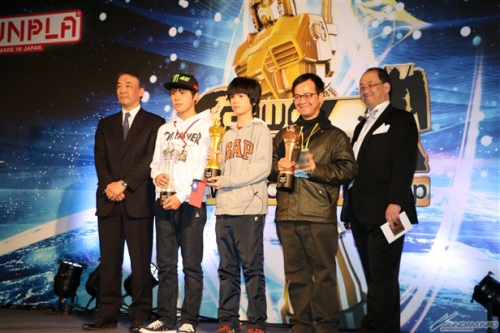 “I want to thank everybody here, my wife, my parents and all my friends.” (Wang Chang Bin)

“The theme is of recreating a memory of an ex-serviceman, with the figure’s reproduction placed in the front, while some Gelgoog and Zaku are built on the inside part. Thanks to the reach in details, it’s an amazing work full of careful crafting and coating technique.” (Bandai Hobby Operations Deprtment, Yasunaga Akihiko) 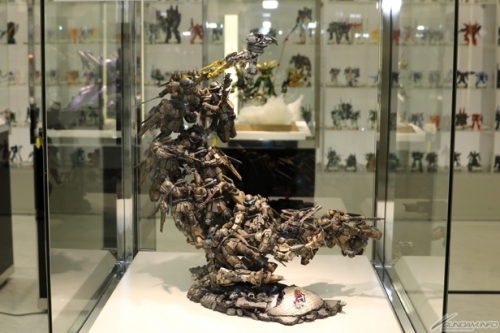 “I’m grateful for this splendid award and this trophy.” (Vichayuth Eiam-Ong)

“Even though this work uses a lot of mobile suits, its forte is in the well arrangement of the whole story created through it, from the figurine of the girl added on the lower-left side, to the Gundam on the top side. Also, the small story is laid out for every Mobile Suit, so that they become highlights of this interesting piece.”
(Model Graphics Editorial Department, Editorial Chief Furuya Tomoyasu) 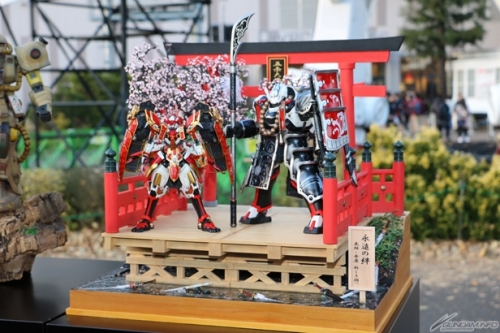 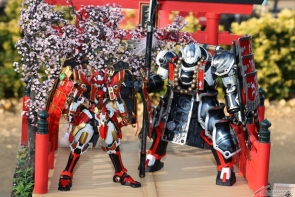 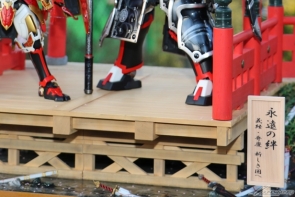 “Many people besides me embrace the idea that, even though gunpla are loved all over the world, it’s something born in Japan, so Japanese modelers really want to get this trophy. I’m extremely happy to be the one this wish was granted to. Thank you so much. (Yokota Yusuke)

“By creating an original Gundam and making it into a Diorama was indeed an incredibly risky work, but overall there is no demerit point to be found. The craftwork, the colouring, the diorama’s base, picking out any of these would still make it stand above all the others.”
(Hobby Japan Editorial Department, Chief Editor Kimura Manabu) 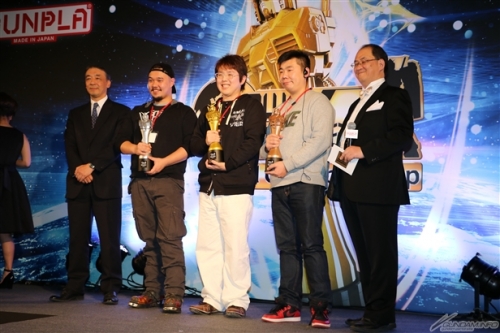 Taken in all the results, the guest judge Ebikawa commented with “Seeing only works that cut away from what we always think was really stimulating” and concluded the tournament.
Furthermore, after the awards ceremony it was announced the decision of holding the “Gunpla Builders World Cup 2017” too. Let’s check out this year’s World Representative’s works and then think of a good idea for next year’s entries!

In addition, after the tournament, each work’s scoring was published by the judges. More info can be found on the Gunpla Builders World Cup official website’s RESULT PAGE. 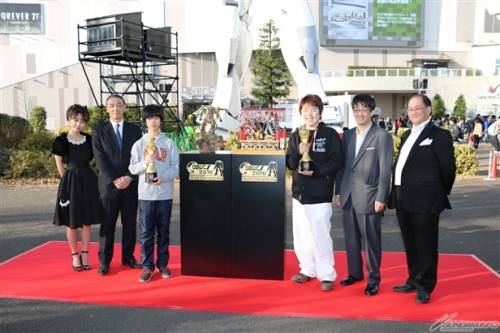 The representative of each country’s works that appeared during the tournament are shown until January 6, for a limited exhibit at Tokyo, Odaiba’s “Gundam Front Tokyo”. To all the people who want to check them out in a close proximity, do drop by!