“Wing Gundam Zero,” a realization of realism and heftiness due to different materials, flexible wing movements, and amazing mobility, has been made into a Hi-Resolution figure. In addition to being equipped with an abundance of mobile gimmicks in each of its parts, it uses a design arrangement that emphasizes a more animation-like image with its 6-wing expansion and more. Its characteristic buster rifle can transform into 4 levels and can also transform into flight form by combining it with its shield. The internal skeletal frame is composed of resin material and metal parts and is enclosed as a completed colored product. Its armor uses plating and gloss injection, which presents a realistic texture through its unit parts.

“Super Fumina” has super evolved into Winning. This is a figure with parts that are not shared with “HGBF Super Fumina” and special attention has been paid to the realistic wrinkly feel of her clothes and skin texture. Her head design is a completely new mold and she also comes with stickers for you to change her eyes with. Her armor has been designed as to not hinder her mobility, which makes it possible to recreate various action poses. The armor parts that cover her body are detachable and it is possible to rearrange them into “SD Star Winning Gundam.” She is equipped with weapons made using clear parts with transformation mechanisms into various shapes.

The black colored “Amazing Red Warrior” that appears in Gundam Build Fighters Battlogue has become a HGBF figure. The suit color has changed from the red of the “Amazing Red Warrior” to black and has a both profound and luxurious coloring recreated through two black and one gold for a total of three colored molds. The kit comes with a gunblade, beam rifle A, beam rifle B, and a new armament that can be made into a rifle by combining new parts.

※ All action bases aside from “HGBF Winning Fumina” are sold separately. 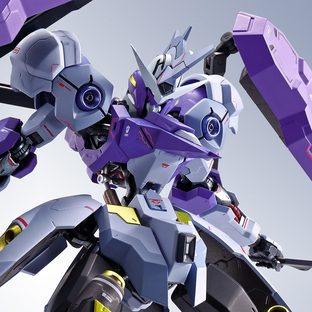