■PG 1/60 GUNDAM EXIA (LIGHTING MODEL) On sale December 2, 2017 / 34,560 yen (tax included)
“PG GUNDAM EXIA” has attained its ultimate form thanks to the latest technologies and will be releasing as the third product installment of the “GUNPLA EVOLUTION PROJECT”, a first for the PG series! The model’s “evolution point” will be its lights emitting and has been recreated with three new “LUMINOUS ELEMENTS.” These elements are an armor and frame structure that allows you to experience its energy transmission, a newly designed LED unit that can express the change in colors due to an accumulation or compression of GN particles, and the first-ever use of light-guiding material in Gunpla history. Furthermore, the model is complete with accessories such its subtle details and gimmicks derived from thorough research, a wide range in mobility, an exclusive base, and an abundance in armaments!

■PG 1/60 GUNDAM EXIA On sale December 2, 2017 / 19,440 yen (tax included)
The regular version of “PG GUNDAM EXIA” will also be released! Under the supervision of mechanical designer Mr. Kanetake Ebikawa, attention has been placed onto the solar furnace GN Drive, the suit’s best characteristic, and the mechanism that will transmit GN particles throughout its entire body has been thoroughly investigated! The design arrangement and internal frame structure derived from that investigation is realized through this model! This product will also use metallic stickers to represent its light emitting points due to light reflection!
※ This product does not come with a LED unit.

■HGUC 1/144 BLUE DESTINY UNIT 2 “EXAM” On sale December 9, 2017 / 1,728 yen (tax included)
“BLUE DESTINY UNIT 2” is releasing in the latest HG format! Aside from its Gundam-type head, its space backpack, beam rifle, and shield are new molds; its space backpack follows its design exactly and once more equips the same backpack as BLUE DESTINY UNIT 1! Its shoulder armor comes in two colors: red or blue. You have a choice of recreating Nimbus’ mobile suit with red shoulders or the Federation Forces’ mobile suits “before they are stolen” with blue shoulders! Its twin cameras give you an option of recreating its regular state or its state when it is operating the EXAM System!

■HGPG 1/144 PETIT’GGUY LOCKON STRATOS GREEN & PLACARD On sale December 9, 2017 / 540 yen (tax included)
A Gundam Meister-colored PETIT’GGUY made in the image of Lockon Stratos’ pilot suit is being introduced for Mobile Suit Gundam 00’s 10th anniversary! The kit comes with stickers made in the image of his pilot suit to stick onto its body as well as stickers printed with the character’s famous lines for you to stick onto its placard and enjoy! The product also comes with extra stickers that you can stick in various places!
※ The other products pictured are not included. 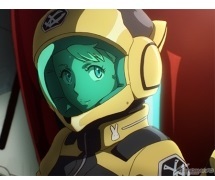 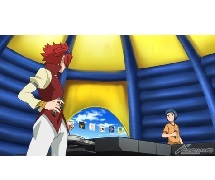