Commemorative video from director Motohiro and "UNIQLO" collaboration too! 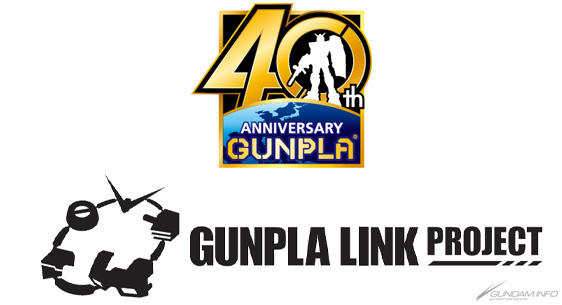 BANDAI SPIRITS has announced on February 21, 2020 (Fri) that, in celebration of the 40th anniversary of the release the "gunpla" plastic model kit of the Gundam series in 2020, they will begin the "GUNPLA LINK PROJECT".

The "GUNPLA LINK PROJECT" links gunpla with various things, people, and ideas, and the thoughts about gunpla are expressed by each form. Through gunpla, and even beyond gunpla, the people of the world are connected, and it is a project that connects these feelings to the future.

With the keyword of this project being "LINK", the release of products that are a compilation of the 40th anniversary, the gunpla manufacturing experience, and large events will be held. Also, a media mix that accompanies video production, and various collaborations are being developed, so let's introduce them together.

【Release of 40th Anniversary Compilation Products】
Aiming towards the 40th anniversary of gunpla, it is a compilation of the Gunpla Evolution Project. A message connecting the status of gunpla decades later and how it connects with gunpla in the future will be presented.

Gundarium Alloy Model 1/144 Scale RX-78-2 Gundam
Limited production pre-orders start July 2020 on Premium Bandai, price to be announced
According to the story of "Mobile Suit Gundam", "Gundarium Alloy" is used in the armor material of Gundam. It is a titanium alloy refined on the lunar surface. Since in reality we cannot refine on the lunar surface yet, in cooperation with Epson Atmix Co., Ltd, following the anime settings, titanium, aluminum, and rare earth element yttria have been refined together with the latest in metal forming technology. Gunpla that can be assembled with this earth-made Gundarium alloy armor will be released. 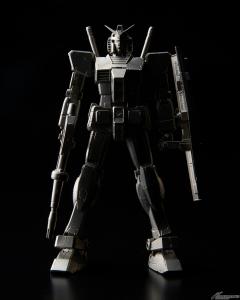 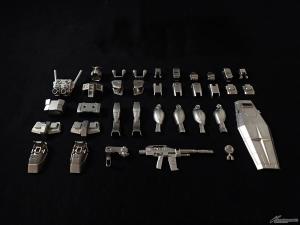 AUTO-TRANS MODEL RX-0 Unicorn Gundam
Release date to be announced, price to be announced
The history of the pursuit of gunpla for 40 years is also a history of struggle with gimmicks. Starting with the reproduction of the variable MS "Z Gundam" transformation mechanics, to the transformation of "Unicorn Gundam", the gimmicks that are able to be animated in an instant, how are they modelled, as a real MS, the reproduction method is discovered through trial and error, and by continuing to pursue without compromise, it was a technical innovation of gunpla. And, in a step closer for gunpla to approach real MS, products that contain automatically transforming gimmicks will appear. 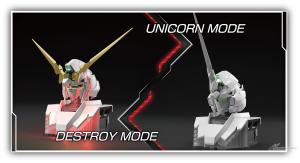 PERFECT GRADE UNLEASHED 1/60 Scale RX-78-2 Gundam
Release date to be announced, price to be announced
The culmination of 40 years of gunpla to the present, the ultimate gunpla will be released. "Perfect Grade" is equipped with the latest technology of gunpla, with no compromise in either the internal structure or the appearance of the molding, this is the epitome highest quality brand that embodies the ultimate appearance of gunpla. This product is part of the "Gunpla Evolution Project" that began in 2016, and through the study of the evolution of gunpla from many different directions, the flow of knowledge and technology gained flows greatly, and the product bonds have been unconstrained, or in other words "UNLEASHED", and has become a PERFECT GRADE.

Gunpla Present Project】
From the memories of the gunpla boom at the time, to the gunpla communication between parents and children, people are connected through gunpla, and that connection has been supporting gunpla for 40 years. Because gunpla provides the opportunity to connect friends, companions, colleagues, and family, from the desire to connect and widen the circle of "fun" the Gunpla Present Project is enacted.

Through Gundam, gunpla fans, and events in the entire country of Japan, connections are made in various places, and this circle will spread to the whole world.

■ Large Events
At "THE GUNDAM BASE FUKUOKA", which opened last year November in Canal City Hakata, Fukuoka, the 11th Canal Aqua Panorama "GUNDAM SCRAMBLE IN FUKUOKA" has opened to the public. Set in Fukuoka, it is an entertainment show that fuses together a video projection and fountain production. At "THE GUNDAM BASE FUKUOKA", the MS that appears in this video will be released as a limited gunpla.

In addition, in the fall, besides a large Gundam event being planned for the Gunpla 40th Anniversary in Tokyo, the "Gunpla Builders World Cup 2020" tournament, a gunpla-building contest to determine the best in the world which is celebrating its 10th anniversary, will be held.

■Gundam Manhole
A joint cooperation project between Sunrise and Sotsu, aiming beyond the 40th Anniversary of Gundam, together with the cooperation of local governments nationwide, the progression to install an original manhole cover in Gundam design proceeds. From today, on the Mobile Suit Gundam 40th Anniversary Project official site a teaser page and inquiry form are published, and inquiries from local governments nationwide will be responded to. More details will be released later on the same site. 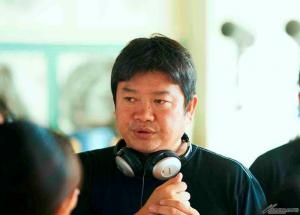 Comments from Katsuyuki Motohiro
Congratulations on the 40th anniversary of gunpla! Up to now I have been involved in various forms through Gunpla Supporters planning. Last time I was involved in the coloring project, but with the timing of the Gunpla 40th Anniversary Commemoration, I will express my love for gunpla in the form of video.
I have enjoyed making gunpla since I was a child, but that fire does not cool off! I am working hard to be able to share that feeling with you, so please look forward to it.

■New Animation "Gundam Build Divers Series Battlogue (tentative)"
Distribution, broadcast, and times to be announced, produced by Sunrise ※Voting to determine the MS to appear will commence April 2020
The mecha that appears in the anime will be determined by fan voting, and the dream gunpla battles that fans hope for will be produced in "Gundam Build Divers Series Battlogue (tentative)". The "Gunpla Big Vote" to determine the mecha that will appear in the anime will be held on the Gunpla 40th Anniversary special page starting April 2020. 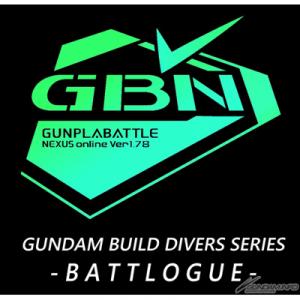 【Collaboration With Various Businesses and Brands】
By connecting gunpla with partners in various fields, collaboration projects will be carried out, and the partner's feelings towards gunpla will be expressed.

End of March 2020 release, ¥1,650（tax inc）
The three companies of UNIQLO, BANDAI, and BANDAI SPIRITS, in a UT project collaboration with bonus gunpla included, will release "UT" with 8 types in all that have a gunpla motif design at UNIQLO stores and online shops. Also, as a bonus for buyers, a "UT Original Limited Gunpla" will be included as a present.
Details will be announced on the UNIQLO Official HP later. 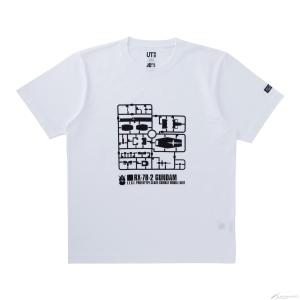 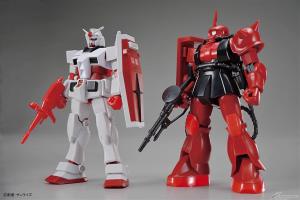 April 29, 2020（Wed）release, ¥6,600（tax inc）
As a collaboration project of the Gunpla 40th Anniversary and LUNA SEA 30th Anniversary, from the LUNA SEA new original album "CROSS" through "THE BEYOND" will be a single cut, and released as "LUNA SEA Exclusive Zaku II" package including original gunpla.
Details can be found in this article 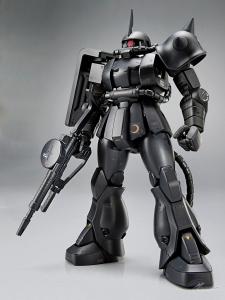 Haropla Haro J League Ver.
Released starting February 8, 2020（Sat）, ¥600（tax inc）
The soccer ball specification "Haro" is released from the plastic model series "Haropla". Thanks to this collaboration, it is a cute design envisioned of the face-painted supporters watching at the stadium. 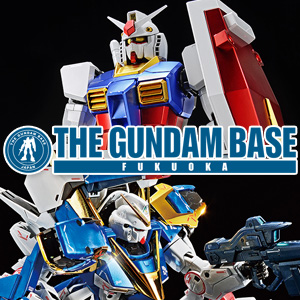 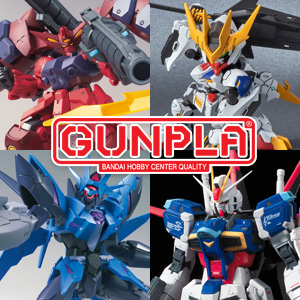 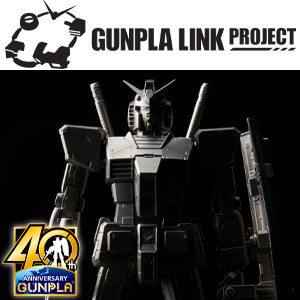 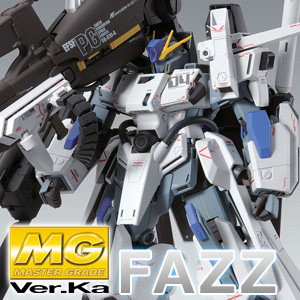 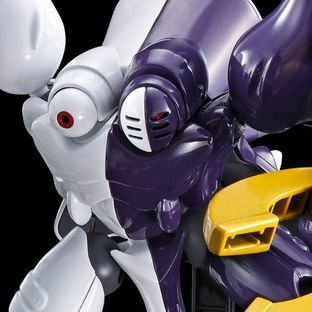