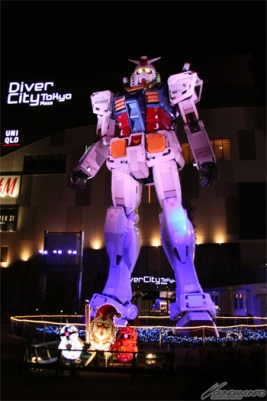 The 1/1 Gundam standing in Odaiba, Tokyo's Diver City Plaza will be lit for the holidays December 1st through the 25th.

As an added holiday touch, lighting during the performances will also glimmer in time with Christmassy music. Joining the standard projection on the wall of Diver City Plaza, you'll see Santa Gundam plus your favorite mobile suits as snowmen and elves hurrying to bring you your presents.

▲ An impression of the projection. A goofy Gundam Santa appears! 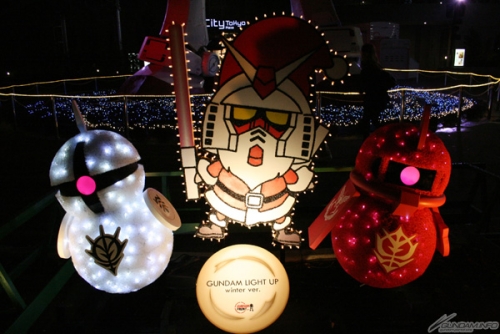 ▲ Get your picture with Gundam Santa and his little helpers! (* Lighting currently under adjustment)

[4:30 PM–]
Light-Up begins
The Gundam will take on a fantastic air as it is surrounded by beautiful light, with waves of illumination washing over its feet.

[5:00–9:00 PM, on the hour】
Light-up performance Winter Ver. (Without projection, 5 daily)
As an added holiday touch, lighting during the performances will also glimmer in time with Christmassy music.

[5:30–9:30 PM, on the half-hour】
Gundam Stand Atop Tokyo Winter Ver. (With projection, 5 daily)
The light and sound take on a Christmas air, with Gundam Santa and mobile suits playing on the wall of Diver City Plaza.

* Events may be adjusted or canceled due to weather,

■ Get Christmas-only Gundam Front Tokyo pins and stickers!
Gundam Front Tokyo, on the 7th floor of Diver City Plaza, will be giving away a free pin with every ticket between December 1st and December 25th.
Visitors to the gift shop (no admission required) can pick up exclusive Christmas postcards and receive a special sticker sheet if they spend ¥1,000 or more. 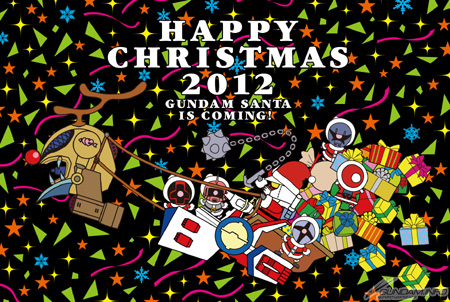 * One randomly-selected pin per customer.
* Pins included with ticket purchase.
* Stickers included with gift shop purchases: Spend ¥1,000 for one, ¥3,000 for two, or ¥5,000 for three sheets.
* Available while supplies last.