The March 2021 Issue of Monthly Gundam Ace is On Sale Today! The Countdown Feature to Mobile Suit Gundam Hathaway Begins! 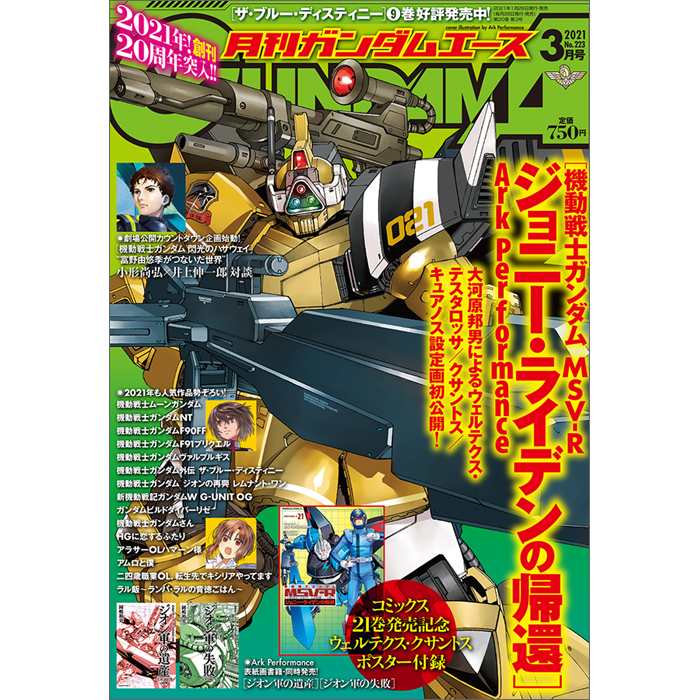 News of the GUNDAM A 20th Anniversary Special Exhibition
Walk back through Gundam Ace’s 20 years of history! The exhibition will feature various important scenes like the Last Shooting through projection mapping.
Other exhibits will include original art from various works throughout the ages as well as a complete reveal of all the pages of the last episode of Mobile Suit Gundam: THE ORIGIN.
It will be held at the Science Museum in Tokyo between Saturday, January 30, and Tuesday, February 23.

The color settings of 3 Gelgoog Vertex machines by Okawara Kunio
Revealing the colors of the Chimera Corps 1st Squadron from Mobile Suit Gundam: MSV-R The Return of Johnny Ridden!
In celebration of the release of volume 21, we’ll feature the design pages for the Testarossa, Curenos, and Xantos.
A figure of the Testarossa, the MS used by the Crimson Lightning that cuts through space, will also be released!

Countdown to Mobile Suit Gundam Hathaway: A Cross-Talk Between Naohiro Ogata and Shinichiro Inoue
The universe that Yoshiyuki Tomino connected from Mobile Suit Gundam: Char’s Counterattack to his novels, Hathaway’s Flash…
Starting this issue, we begin a countdown to Mobile Suit Gundam Hathaway as we prepare for its premiere on Friday, May 7th.
In this issue, we welcome Shinichiro Inoue, who worked on the Tomino feature in Monthly Newtype at KADOKAWA at the time, and Naohiro Ogata, a producer at Sunrise’s #1 studio that is working on the animation adaptation. They discussed the original novel, some behind-the-scenes stories from the writing process, and what Yoshiyuki Tomino is like as both an animation director and a writer.
* This article was originally published in Japan. Availability & timing may vary by region.
Please enable cookies in order to use My Page

GUNDAM A
PREVIOUS
NEXT