“GN-001 Gundam Exia” is the latest product in the PERFECT GRADE series, the most prominent Gunpla brand, that was released last December 2017. We will deliver an opening feature on the kit that is a product that marks both the 20th anniversary of PERFECT GRADE and the 10th anniversary of Gundam 00.
As we enter the 10th year of the series, we definitely hope that you take in the “now” of Gundam 00 that will also further raise expectations of its future developments.

Keep an eye on that “worrisome guy”!!

Full Metal Panic!, the popular sci-fi military series by Shoji Gato, will begin broadcasting a new anime this spring by the name of Full Metal Panic! Invisible Victory to welcome the series’ 20th anniversary this year. There has also been an increase in activity in the development of products related to the series in the hobby world.
In this issue, we’ve increased the number of pages for Full Metal Panic! featuring select products! We definitely want you to pay close attention to this feature as we’ll give a sample review of the AOSHIMA 1:48 scaled kit that was upgraded and released last October. We’ll also introduce lots of information about new products and the anime!

The super popular RPG Persona 5 is adding a second installment to the AMAKUNI figure series! Introducing Futaba Sakura in her phantom thief form!
The 3D figure has been realized without detracting from her image from the series due to her deluxe stand made in the image of the inside of her persona Necronomicon.
Her glasses are removeable and it’s even possible to directly attach her goggles thanks to replacement parts. This means that you can enjoy displaying her in various ways!
The [Limited Edition] figure has wonderful specifications and is built with a light gimmick with LEDs in her deluxe stand.
The figure can be illuminated with several blinking patterns made in the image of Necronomicon!
This is an authentic Futaba Sakura product that was born under the complete supervision of character designer Mr. Shigenori Soejima!

The figure “Muramasa Sansei Oasis Ver.”, which gained immense popularity when released in 2015, is being reintroduced after improving each of her specifications!
The appearance of her swimsuit being pulled upwards has been added with newly made body parts. Water even looks like it’s dripping down the figure’s skin thanks to original technology newly developed by AMAKUNI. The appearance of Muramasa as she’s stands by the water’s edge has been recreated even more realistically than before.
Her removeable swimsuit was recreated with replacement body parts. The figure’s beautiful body can be enjoyed without losing its shape. 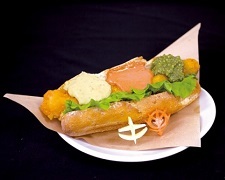