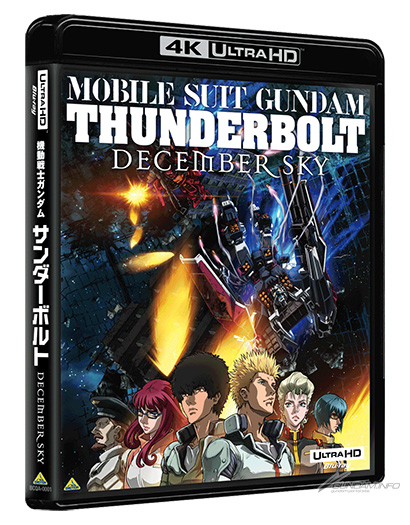 The release for the 4K ULTRA HD Blu-ray of the new original animation “Mobile Suit Gundam THUNDERBOLT DECEMBER SKY” has been confirmed for December 22nd (Thursday) release by Bandai Visual.

4K ULTRA HD Blu-ray is a new generation media, by which viewers can enjoy high quality pictures with overflowing realism thanks to the amazing richness provided by HDR (High Dynamic Range) and extremely high definition which exceeds by four times a normal Blu-ray. It’s the first time it has been commercialised through the Gundam series.

The video for “Thunderbolt”, of which Kou Matsuo personally took part in as a supervising director, was encoded into the superb HDR color gamut.

Furthermore, as special clips, parts from both “Mobile Suit Gundam: THE ORIGIN” and “Mobile Suit Gundam UC” - and others - will have test recordings with the same 4KHDR technology. Let’s check out this new stage towards which “Gundam”s video recording is heading.

■ What is a 4K ULTRA HD Blu-ray?
It is a new generation of recording media that supports 4K video. It adds an incredible improvement in details, which accentuates the 4K video resolution (3840x2160 pixels) that is four times bigger than normal Blu-ray resolution. With HDR (High Dynamic Range) and its depth of color richness, the video pictures blossom with superb quality, while BT.2020 increases the available color space, pushing the limits beyond the previously existing standard television color ranges, as they present even higher quality which surpasses normal Blu-rays.

■ What is HDR (High Dynamic Range)?

Blu-rays, compared to conventional standard television signals, have a wider and cleaner dynamic range (the range of darkest and brightest parts), making the picture perfectly visible without ruining its dark sections and enriching its brightest ones, to present an effectively levelled and smooth image.

※With conventional SDR (Standard Dynamic Range), pictures couldn’t be recorded at more than 100nit (Nit = measurement indicating 1 square meter of light), but in HDR the peak level of brightness can reach higher levels up to 1,000-10,000nit.

Blu-rays, compared to conventional standard television signals, have a vastly wide spectrum of colors. However, up to now, its true forte couldn’t be achieved within the BT.709 standard. But with BT.2020, a wider extent of color space could finally be achieved, and not just with film footage. In anime content, the original colors contained in the video are able to be displayed.

※In the standard color space of BT.709, colors existing in nature can be shown only up to about 35%, while in BT.2020 it extends up to approx. 76%.
Please enable cookies in order to use My Page