ツイート
"What is 'Gundam', anyway?" This simple (?) question is answered in our seventeenth casual weekly column just for new fans!

Part 1 was Gundam faces and coloring, and then part 2 was masked men and Haro. Part 3 was all about the Universal Century, part 4 was mobile suits, part 5 took on MSVs, and part 6 covered the "Zaku" and "GM", part 7 took on parts swapping, part 8 was an example of mobile suit R&D, part 9 was all about the women of the first Mobile Suit Gundam series, part 10 focused on Gundam's "big brothers", part 11 touched on amphibious mobile suits, part 12 introduced some middle-aged men, and parts 13 and 14 were the first and second parts of our look at Gundam TV themes, parts 15 and 16 took on Gundam's 'Gunpla' plastic models; this week we've got one more really iconic piece of Gundam.

There are many, many words you may hear as you look into Gundam, but surely "SD Gundam" is one of the first.
The long-running "SD Gundam" lets young as well as old enjoy Gundam.

Plus, the "BB Senshi" Gunpla series just marked its 25th anniversary in 2012! This week, let's begin an intro series on SD Gundam!


Part 1
What makes an SD Gundam? Even more variations than a normal Gundam series! 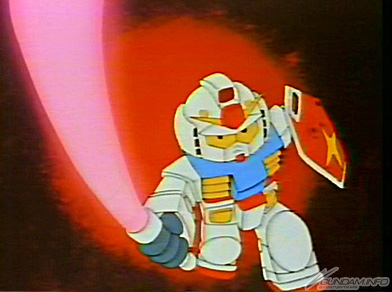 First things first: What's the "SD" stand for in SD Gundam?  It's an abbreviation for "Super-Deformed". So SD Gundam is really "Super-Deformed Gundams".
So they're round little Gundams about two or three heads high, with short stubby arms and legs. (Ringing a bell yet?)

The casts aren't just robots, though. They also include humans like Amuro and Char.
But even each mobile suit has its own anthropomorphized personality. This is how SD Gundam differs from normal Gundam.

SD Gundam refers to an entire series, which tells its own unique stories through a wild mix of SD versions of your favorite characters.

These familiar yet suddenly far-cuter characters are lovable whether you're a dedicated Gundam fan or someone who, uh... Doesn't do robots. 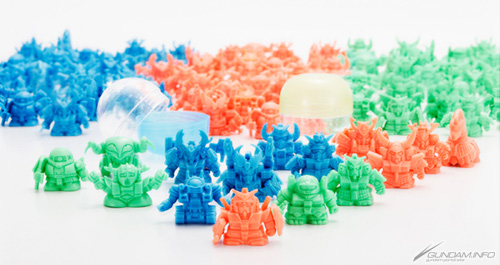 SD Gundam started with the "Super Deformed Gundam World" Gundam eraser series of PVC Gashapon (capsule machine) figures in 1985, and rocketed to instant popularity with its cuteness and collectability.
(It seems like the original SD designs were inspired by pullback robots and other SD characters that were popular at the time.)  These toys, rising on the popularity of character erasers at the time, came one or two to a hundred-yen capsule.
The "Gashapon Senshi" series was molded in the standard five colors of orange, blue, flesh, yellow, and green, plus rare colors and even limited-edition die-cast versions.

Built with a hole so they could be skewered on a pencil, they were a hit with kids of the day, especially boys in elementary school. 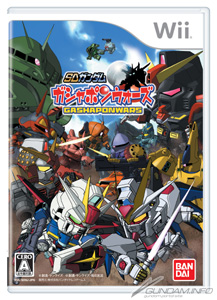 Adaptable to formats from anime to comics, toys to models, Carddas, video games, and more, at one point in the early '90s the SD Gundam boom even eclipsed the rest of Gundam.


Part 2
What makes an SD Gundam? Models that take all the precision mechanics of a normal Gundam kit and add lots of cute! 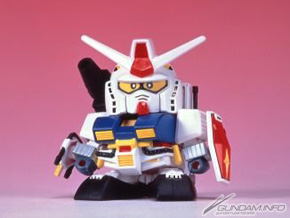 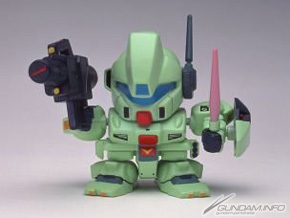 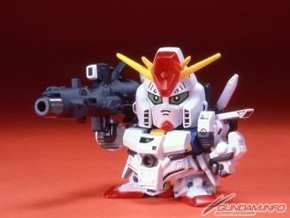 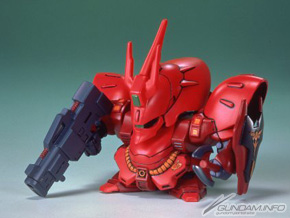 This, of course, lead to easy-to-build SD Gundam model kits designed for beginners.
The SD Gundam BB Senshi line, launched in 1987, is still amazingly popular.
BB Senshi, never afraid to make Gundam characters its own, launched with kits like Gundaman and Zakun. However, with the premiere of Mobile Suit Gundam: Char's Counterattack in 1988, the film's designs were also given faithful SD Gundam BB Senshi adaptions. Ever since then, BB Senshi appearances are de rigueur for suits from Gundam TV series.
Its unique lineup, packed full of both adaptions and its own creations, are a fresh spin on Gunpla.
By the way, the "BB" in the name comes from the same BBs shot by airguns. The earliest models shot BBs; however, due to product liability and safety regulations, this feature has since been replaced with combinations, transformations, and more.


Part 3
What makes an SD Gundam? Series with their own unique twist, separate from normal Gundam! 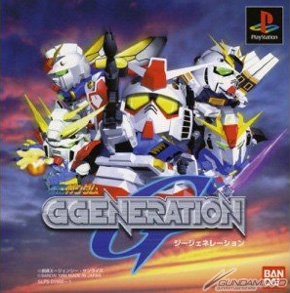 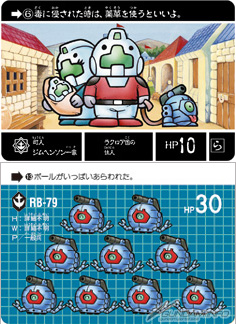 Now, in the second half, let's give you a good idea of how SD Gundam breaks down into genres.

First we have the "SD Gundam World", normal SD, including BB Senshi and Mobile Suit SD Gundam, which features characters from every TV series.
Perhaps because it centered around parodies that could only be accomplished in SD, this series is full of comical designs and plots, but there's plenty of original depth to be found in the SD Gundam R and SD Gundam Bind subseries.
The SD Gundam G Generation strategy games bring SD Gundam's designs to the gritty end of the spectrum, and this has had a lasting impact on SD Gundam. 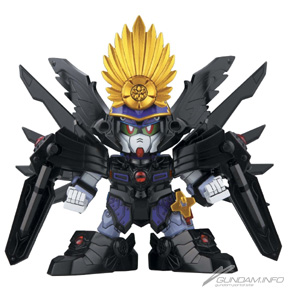 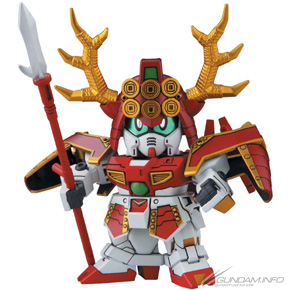 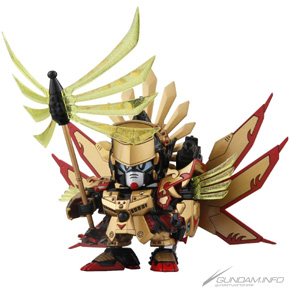 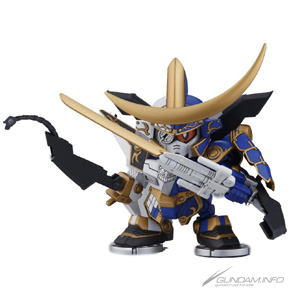 There's also the SD Sengokuden or "Musha Gundam" series, starring the uber-Japanese Musha Gundam clad in samurai armor. In a world based on Japan's 16th-century civil wars (even divided up into "arcs" based on the Japanese Zodiac!), mobile suits who are their own living, breathing (?) characters rather than robots.
(This originally wasn't SD per se, and you can still pick up model kits in normal proportions.)
Plamo Kyoshiro, which began its Comic Bonbon run in June of '85, may be famous for birthing Musha Gundam, but that didn't stop it from crossing over with a slew of other series and ensuring its own lasting popularity.
While it hung together with a completely original plot through the early '90s, it then went with a full-on embrace of Japanese history; there are now Gundams based on legendary generals Yukimura Sanada, Masamune Date, Nobunaga Oda, Hideyoshi Toyotomi, Ieyasu Tokugawa, and more. 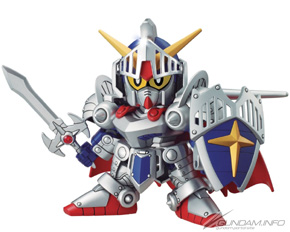 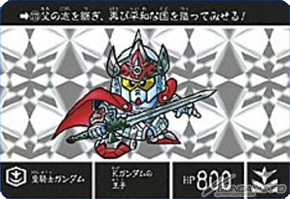 Going from East to West, we have the SD Gundam Gaiden series, better known as Knight Gundam: hit fantasy RPGs.
Starring anthropomorphized Gundams, the world of Knight Gundam has a strong sense of history that keeps the exploits of past heroes on villagers' tongues.
Set in the "Saddarc World" (try reading it backwards!), SD Gundam Gaiden centers around Carddas designs. 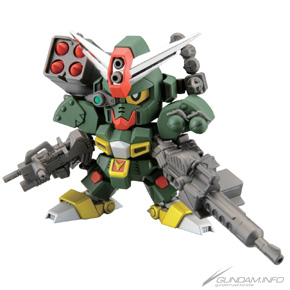 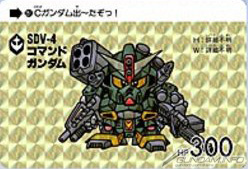 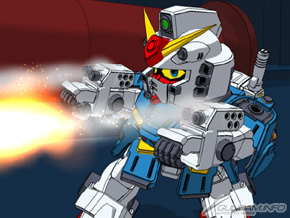 Next we come to SD Commando Senki, also known as Commando Gundam. A more military-style spin on SD designs, it split its characters into air, land, and sea squads while featuring aircraft and tanks, making it a hit on the scale of Musha Gundam or Knight Gundam.
In fact, SD Commando Senki's world was the far future of Musha Gundam and Knight Gundam!
Its hero, Captain Gundam, would later appear in SD Gundam Force. 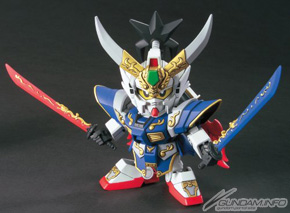 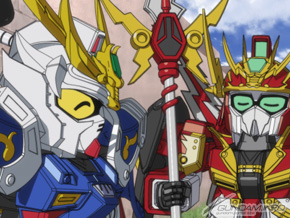 The mobile suits of SD Gundam Sangokuden, the 20th anniversary BB Senshi series, are based on the near-legendary heroes of Chinese history whose exploits are portrayed in Romance of the Three Kingdoms. While these MS are still clad in armor, they take their styling cues from the China of over two millennia ago rather than the Japan of the early 1600s. And, of course, they tend to have China's famous generals as namesakes.
SD Gundam Sangokuden Brave Battle Warriors came to your TVs in 2010, but the pattern of toys followed by anime is SD Gundam tradition.
The models are a bit lighter on parts than, say, a Musha Gundam, but they're easier to build, easier to pose, and their feet even work as stamps: it's no wonder that even the biggest kits, running thousands of yen, sell out nationwide. Sangokuden kits are still popular worldwide.

Anyway, that's our seventeenth column but our first glance at SD Gundam. We've learned all about its origins in BB Senshi and its biggest hits.

Next time, maybe we'll revisit SD Gundam and bone up on its anime adaptions and 25th-anniversary celebration!


[Author profile]
Ema Baba
Scriptwriter. Troublemaking scenarist.
Learning more every day to teach you about the fun of Gundam!