"What is 'Gundam', anyway?" This simple (?) question is answered in our thirteenth casual weekly column just for new fans!

We come out of the shadows with a 13th super-simple column for new Gundam fans!

Part 1 was Gundam faces and coloring, and then part 2 was masked men and Haro. Part 3 was all about the Universal Century, part 4 was mobile suits, part 5 took on MSVs, and part 6 covered the "Zaku" and "GM", part 7 took on parts swapping, part 8 was an example of mobile suit R&D, part 9 was all about the women of the first Mobile Suit Gundam series, part 10 focused on Gundam's "big brothers", part 11 touched on amphibious mobile suits, and part 12 introduced some middle-aged men, but this week we've got one more really iconic piece of Gundam.

Gundam has spent over 30 years as one of the foremost robot anime series in Japan (or the whole world!), and this brings with it a treasure trove of theme songs through the years.

Just listening to a Gundam theme can tell you everything about the trends and history of anime themes in the year it aired.
So for our 13th column, let's take a look at the history of anime music, as seen through the lens of Gundam TV themes! 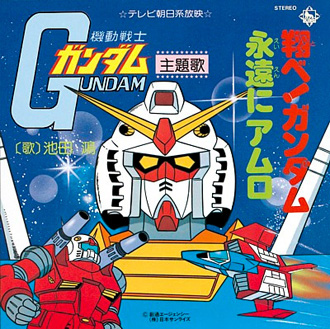 If we're talking about Gundam theme songs, we just have to start with Mobile Suit Gundam's 1979 opening theme Tobe, Gundam.
Robot anime had already featured some of Japan's most memorable and earwormy anime themes, (some people couldn't hear them once without humming them ten times! Or a hundred, or a thousand, or...) and for the airing of Mobile Suit Gundam in 1979, the theme included a simple repetition of the Gundam's name for an audience primarily composed of young children.
(The onscreen lyrics were all easy for children to read, too. I guess this "simple for beginners" idea goes back a long way. *laughs*)

It follows an established pattern for anime opening themes. First you show the Gundam and other mobile suits doing something awesome, then you show some action footage of Amuro and his friends, a determined expression on Amuro's face, and finally the main cast striking a pose. It's a perfect example of the '70s opening.
The ending theme began by calling "Amuro" solemnly, something we also see in Majokko ****-chan (a magical girl show,) Cutey ***** (a show about a transforming android woman,) and **kyu-san (a show about a young monk.) This was commonly used in the mid to late 1970s to add a touch of realism to anime themes. 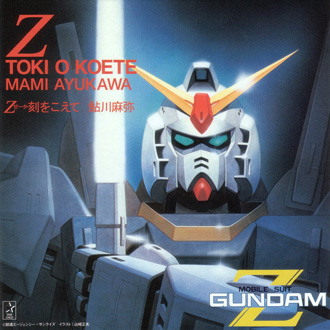 Next, we come to the 1985 Mobile Suit Zeta Gundam opening, Zeta - Toki o Koete (based on Better Days are Coming.)
The lyrics and visuals both reflect the new '80s trend toward more mature album rock, with a chic, grown-up feel. (And the onscreen lyrics aren't shy about wheeling out the big words, either.)
This avant-garde approach and demand for a artistically-superior performance came to embody Gundam's trendsetting style.

It was performed by veteran singer and Sunrise theme favorite Mami Ayukawa. The original melody to Better Days Are Coming was written by American oldies/pop giant Neil Sedaka. Zeta really rolled out the big names. (If you haven't heard of him, ask your dad or one of your uncles. *laughs*)
Lyrics were written by one Rin Iogi. You may know him better as Yoshiyuki Tomino, great director and father of Gundam.

Anime themes were always written as children's songs, so Tomino's radical idea of producing something with the quality to chart as a standard single required a major leap in quality and its success left an indelible mark on the anime industry. 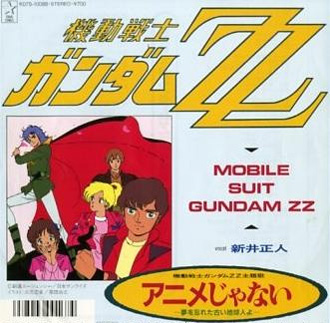 Next up, we have Mobile Suit Gundam ZZ's 1986 opening, Anime ja Nai - Yume o Wasureta Furui Chikyujin yo. This theme, with probably the most iconic single lyric of any Gundam theme, (maybe a little too iconic...) was written by famous producer Yasushi Akimoto (so that's what he was doing 27 years ago!)

Rather than directly referencing the show, he went for a more meta approach; the unforgettable lyric "It's not anime!" in an anime opening still resonates conceptually.

The opening animation shows the ZZ Gundam in action, of course, but there are also appearances by an asteroid skull, an ape, and then a sequence portraying the evolution of man from ape to first Gundam hero Amuro Ray, Zeta protagonist Kamille Bidan, and finally new lead Judau Ashta in a clear homage to 2001: A Space Odyssey.

The backing was composed by Hiroaki Serizawa (who also worked with Akina Nakamori and Checkers), and the arrangement was by famous pop/anime composer Shiro Sagisu. A huge hit, its arrangement and instrumentation (especially that vocoder! *laughs*) were influential throughout the late '80s. 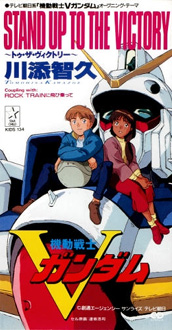 Moving on to 1993, we reach Mobile Suit Victory Gundam's opening theme Stand Up To the Victory.
Tomohisa Kawazoe, bassist of the multi-platinum rock band Lindberg, created a song that ignored all the rules of anime themes, and rose up the charts on its own merits.
(Beginning in the late 1980s, songs by artists like TM Network had begun to be used as anime themes.)

The energetic rock melody, up-tempo snare beat in the lead-in, and wild guitar combine with simple, direct lyrics for an uplifting song that's a pleasure to listen to.

Now on the other hand, the show itself is hard-boiled and serious, but its theme is great to belt out at karaoke. This is a common trait of Gundam songs: (or anime songs in general) people get excited when they hear them!
Even people who've never seen Gundam. (And what a great chance to get them interested?) This amazingly catchy song isn't just a Gundam theme, it's also a bona-fide hit on its own, breaking out of the anime niche. I think I'll give it a try next time. 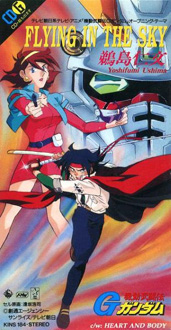 Last up for today, we have Mobile Fighter G Gundam's 1994 opening theme Flying in the Sky.
The opening footage features a gong suggestive of the Gundam Fight that's about to begin, Earth, Japan (Neo Japan), and several Gundams, while the music is a bright, energetic American-style rock arrangement that brings Gundam somewhere it had never been before.

Composition, arrangement, and lyrics are all by singer-songwriter-producer Yoshifumi Ushima (who later collaborated with Tomohisa Kawazoe in the band "TOPGUN.")
Even more than Stand Up To the Victory, its English phrases are incredibly hummable. (Works well with G Gundam's international feel, doesn't it?)

In G Gundam, where martial-arts masters from national colonies do battle in the ring for global supremacy, the active inventiveness and massive scale are summed up perfectly by lyrics mentioning "infinite power". This song's energetic performance makes it shine proudly, like a sun, as a new type of Gundam theme!

And that's enough for our 13th column, Gundam TV themes. Any more of these incredible songs and I'll never be able to get them out of my head!

A strong theme song that expresses the appeal of the show is absolutely vital to Gundam.
Now, you may be thinking "Wait, that's it?" Well, you're as sharp as a Newtype! That's right, next week we keep going!