"What is 'Gundam', anyway?" This simple (?) question is answered in our twelfth casual weekly column just for new fans!

This week, spot us poking up out of the loch with a 12th super-simple column for new Gundam fans!

Part 1 was Gundam faces and coloring, and then part 2 was masked men and Haro. Part 3 was all about the Universal Century, part 4 was mobile suits, part 5 took on MSVs, and part 6 covered the "Zaku" and "GM", part 7 took on parts swapping, part 8 was an example of mobile suit R&D, part 9 was all about the women of the first Mobile Suit Gundam series, part 10 focused on Gundam's "big brothers", and then part 11 touched on amphibious mobile suits, but this week we've got one more really iconic piece of Gundam.

Gundam puts more people than just the hero and his rival behind the controls of a mobile suit! Gundam's supporting casts also include stylish, foppish, and cultured (!?) middle-aged men. (Not just 'old guys'!)
In part 12, we'll introduce to you a few the stern, swag, and lovable (!?) "(MS-piloting) middle-aged men of Gundam."

Now, if we're talking middle-aged men in Gundam, we just HAVE to mention Mobile Suit Gundam's Ramba Ral, boy!! (Uh, imagine I said that in an old man voice.)

A Zeon officer (Lt. Commander) with a commanding presence (that 'stache! that belly!), he looks older than his 35 years. Known as the "Blue Giant", he leads his troops from the front in a (customized) Gouf with blue paint.

When Ramba Ral encounters Amuro Ray in the desert, and Amuro rejects his wife Crowley Hamon's (see part 9 for more details) offer of a meal, Ral's reaction isn't anger but a magnanimous "I like you, boy" which fascinates the young runaway.

His famous "This is no Zaku, boy! No Zaku!" came shortly after, when he first fought Amuro's Gundam.
This natural-born soldier was the first man who young Amuro admired enough to want to surpass.
Even though Ramba Ral was one of Amuro's enemies, he took on an indispensable, almost fatherlike role. 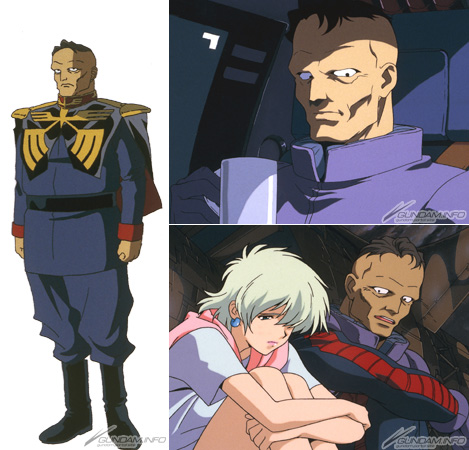 Next, Norris Packard from Mobile Suit Gundam: 08th MS Team! Norris, possessed of a unique, unforgettable haircut, is another career Zeon soldier (a Captain) and just as much a model military man as Ramba.

As first his steely glare may make you wonder what crime he's wanted for, but it's just because of his sober temperament and oath of absolute loyalty to the noble House Sahalin.
Fighting for his master Rear Admiral Ginias Sahalin, he also nurtures and protects Ginias's younger sister Aina Sahalin with all the kindness a blood father would show. This mature kindness is his signature trait.

A first-rate mobile suit pilot, when suited up and ready to sortie he's the very picture of an ace pilot. Just as successful in his Gouf Custom as Ramba Ral was in his Gouf, Norris helps solidify the image of the Gouf as a doughty foe with a veteran pilot behind the stick.

In the end, he deploys alone in his Gouf Custom to hold off the 08th MS Team, in order to allow wounded comrades to escape in a hospital ship...

His unvarying bearing and decorum, along with undying loyalty to his master, bring to mind the word "bushido". 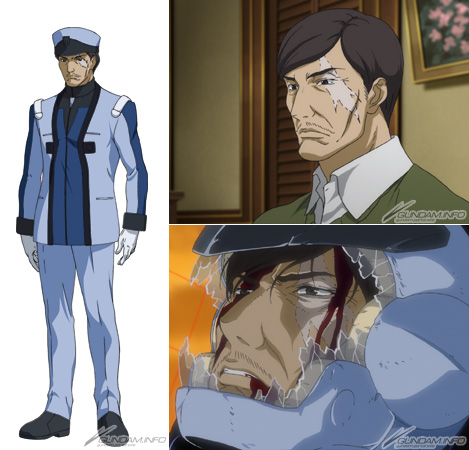 Continuing on, Sergei Smirnov of Mobile Suit Gundam 00!
"The Wild Bear of Russia", with wild, stormy looks to match, he holds the rank of Lt. Colonel in the HRL (Human Reform League).

The scar around his left eye is an old war wound. He looks the part of a skilled pilot and commander, and his looks don't lie.
Believing only in what he can see for himself, this hands-on type impresses his subordinates by personally taking to the field to lead a special task force flushing out the armed organization Celestial Being's Gundams.

He even manages to keep up with Setsuna F Seiei's Gundam Exia while piloting a high-mobility Tieren (the HRL's mainstay mobile suit, not particularly known for its performance.) (In season 2 he's still out there in a Tieren All Region Type!)

Unsurpassed in his dedication to his young subordinates and humane acts, he's often described as kind-hearted, but in a cruel twist his soldier's responsibility to protect the lives of common citizens forced him to give an order that lead to his wife's death.
In the second season, promoted to Commander in the Earth Sphere Federation Army, his failure to stop an old friend's coup attempt combined with a years-long family misunderstanding with his son Andrei lead to...
(Lead to what? Watch Mobile Suit Gundam 00 and find out!)


Part 2
What makes a Gundam? Sometimes the fearless, fabulous middle-aged men are on your side, too! 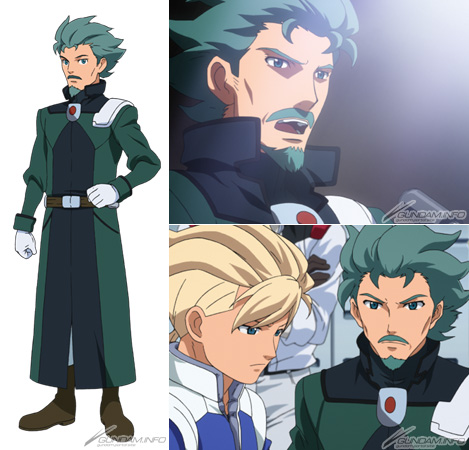 Now let's meet Flit Asuno from Mobile Suit Gundam AGE.
In Asemu's arc, this 39-year-old has found the time to grow a truly stylin' beard at the same time as he raises his son Asemu, daughter Yunoa, and leads the Federation general staff at Big Ring with the rank of Vice-Admiral. (This also means deploying to the front during emergencies.

Still a well-practiced mobile suit pilot, he steps back into the cockpit of the AGE-1 Flat after 25 years to take on and take down the Vagan Decil Galette's brand-new Khronos. (How'd Decil make it back, anyway? Cryogenics?) During the final battle in Earth orbit, he assumes full command of Federation forces. Then, during his coup d'etat on Courage Day, he leads cells dedicated to purging the government and military of enemy sympathizers. Perhaps this anarchistic dedication to the absolute destruction of his enemies reflects the trauma of losing his mother and friends?

While Asemu rejects this path, Flit chose it to prevent Asemu from suffering the same tragedy. Oh, he also takes the extremely important step of passing down the Asuno family's heirloom "AGE Unit" to Asemu on his 17th birthday. There's plenty more to this story, but... Why not see it all in Mobile Suit Gundam AGE? 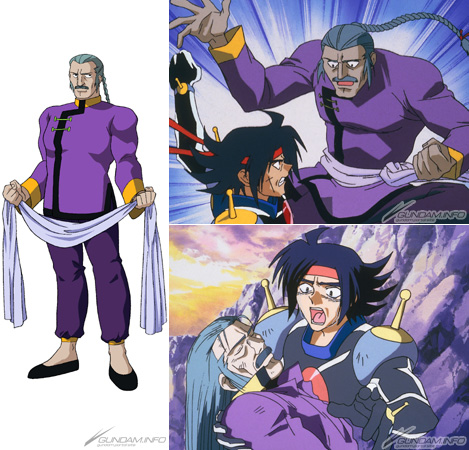 Finally, there's Master Asia, the Undefeated of the East, from Mobile Fighter G Gundam.
This famous man, hero Domon Kasshu's master and his greatest rival, is 49 years old! (I heard you back there asking 'so where's his cane'. Boot to the head!) 49 isn't too old for middle-aged! (Right?)
A martial arts master who's earned every letter of the name "Undefeated of the East", his skills are so amazing that he can fight a Gundam bare-handed and win. (This has to make him the strongest Gundam character ever.) When we first see him, he's fighting off the Dark Army bare-handed.

The "Undefeated of the East" is also Neo Hong Kong's representative Gundam Fighter. Also a member of the Shuffle Alliance (guardians of order), he eventually passes down the "King of Hearts" crest to Domon. As pilot of the Yamato Gundam, Shuffle Heart, Kowloon Gundam, and finally the Master Gundam which he can pilot as an extension of his own body, he eventually clashes with Neo Japan representative Domon.
While young Domon, awestruck by Master Asia's power, took him as his master, after passing down the Sekiha Tenkyoken he becomes Domon's greatest rival.

Recognizing his own incurable illness, and his unfitness to be the Dark Gundam's host, he attempts to recruit Domon, the strongest Gundam Fighter, for his mission of regenerating the Earth. He declares that, after becoming the 13th Gundam Fight championship, he will also take the name "Super Asia, undefeated of the east, west, north, south, and center." Finally, after a no-holds-barred championship battle, twin Sekiha Tenkyokens clash...

Master Asia is all of Mobile Fighter G Gundam's power, gallantry, and larger-than-life worldview given human form, and he stands out as one of the most impressive characters in all of Gundam.

And that concludes our look at middle-aged men who pilot. Characters like these are vital to the Gundam experience.
Gundam puts more people than just the hero and his rival behind the controls of—(Wait, I think I said this before...)
There's just so many fascinating things in Gundam to talk about!