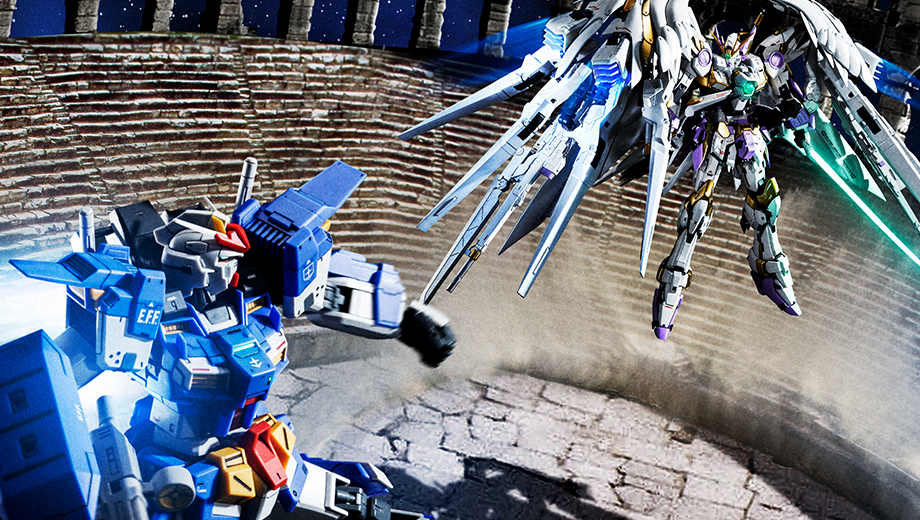 We Will Rock You ~You’re Going Down!!~

The space field of the Girls’ Gunpla Academy resembled the Colosseum in Rome. Principal Rock ordered a certain Force Nest refurbishing/renovation office to renovate the facility along with the Academy’s school building to match his beautiful presence due to the growing number of students. Something clicked in GIMMINA and BALLY’s minds.

“Shimoda did a great job, didn’t he?” GIMMINA said to herself. (Details in Episode 2)

The 180mm Cannon, the Polypod Ball’s main armament, was lost during the mysterious Qubeley’s assault at the storage room behind Shimoda’s office. BALLY was working on a new weapon that could take the former cannon’s place using the modular parts GHL-TBA as its base through trial and error. However, she wasn’t able to login in time. Therefore, the only beings standing in the Colosseum were GIMMINA’s Gundam Storm Bringer and Rock and his…

She gasped at the mighty appearance of the Gunpla from the spectator’s seats which were guarded with a protective screen. The other students sighed and gazed in awe.

“Principal Rock’s Wing Gundam Zero with the Endless Waltz version’s elegant wings make his Gunpla look like an angel. A perfect match with the Colosseum… It’s a true work of art!”
Among the anticipated murmurs, BALLY said to herself with a stern look, “It has angelic wings, eight Messer Zwergs, and a Twin Buster Rifle...”

The voices were transmitted to GIMMINA’s cockpit, who replied, “But they look like the devil’s wings from here.”

“Thus I name my all-powerful slave…” Rock joined in on the conversation.

He had a confident smile in his cockpit, which was projected onto the massive screen in the Colosseum.

“Indeed. It is the absolute ruler that incinerates anything that stands in its way.” Rock smiled, narrowing his eyes.

“Well, I’m sorry to tell you...” GIMMINA had a smile as confident as Rock’s, which also showed up on the screen.

“I don’t care if you’re a ruler or a big fat liar. I’m going home with the Golden Poly-cap, along with the hearts of everyone in the academy, you little phony fallen angel!”

“Let’s see if your massive monstrosity can keep up with the maneuvers of my Gundam Storm Bringer!”

“But how?” GIMMINA and BALLY squealed simultaneously.

The other students cheered.

The eyes of the students were focused on the Wing Zero Lucifer, which fluttered its white wings while gracefully evading the attacks from the Gundam Storm Bringer, which was struggling to take aim.

“These wings are not only for show. Each of its wings has two high output generators and boosters, resulting in four.”

The Wing Zero Lucifer used its Machine Cannons on each shoulder to restrain the Gundam Storm Bringer and closed in.

BALLY tilted her head in puzzlement. Was Rock trying to prolong the battle to find a chance to win?

The Messer Zwergs of the Wing Zero Lucifer fired at once.

“No…!” BALLY shouted while leaning toward the giant projection of GIMMINA on the screen.

“He isn’t trying to prolong the fight! The Principal’s trying to end it at once!”

The eight hidden claw-like cannons fired bolts of thunder at once. The entire field was hit by a shockwave followed by a gigantic fireball that engulfed the field. The protective screen vibrated violently due to the power of the attack.

It took almost a minute for the fireball to die down. All that was left was a large gash in the ground left by the Messer Zwergs, and there was no sign of the Gundam Storm Bringer. The projection on the screen disappeared temporarily and only showed flickers.

“A direct hit… Not even a piece of rubble left.”

A flicker of sadness and regret built up inside of Rock’s heart. It ended all too quickly, and despite it being a serious Gunpla Battle, he had fallen in love with his opponent. Should he have left at least a piece of her to remember her by? Rock suffered from a lingering regret and descended to the ground, where he was greeted by a beam fired from a rifle which came from underground.

He flew up into the air and created a distance between them again.

BALLY frantically squinted her eyes and saw the Gundam Storm Bringer crawling out of the ground.

“So you were hiding in a trench you made using your rifle before the blast from the Messer Zwergs!”

“I’m not letting go of this happy party life at this Girls’ Academy that easily!”

The projection on the screen recovered. It seemed to show GIMM (and not GIMMINA) triumphantly smiling.

The air in the spectator's seats froze.

All of the female students began muttering with disgust.

“Darn it! GIMMINA’s avatar toupee fell off with the shock of the Wing Zero Lucifer’s attack!”

BALLY (who was now looking like BALL) desperately tried to explain the situation. It took a moment that he was also being stared at by astounded and indignant eyes.

Despite being behind the protective screen, the shock of the Messer Zwergs had also knocked BALLY’s disguise off.

“So you two were pretending to be girls?”

“N-no! There’s a really good reason for all this!”

“There’s no good reason that’ll get you out of this in one piece!”

In the midst of the commotion, it was Rock who was the most dumbfounded. He was about to confess his love to the young woman, who turned out to be a man with a scruffy stubble, in the cockpit of the Gundam Storm Bringer.

“How dare you mess with my pure feelings. This is unacceptable!”

The Wing Zero Lucifer flew high up into the sky. The Gundam Storm Bringer attempted to catch up and retaliate at point-blank range. However...

“Are you kidding me? The motor functions are dead!” GIMM exclaimed and clucked his tongue disgustedly. It turned out that he wasn’t left unscathed from the intense attack. He aimed his rifle into the sky and fired rapidly.

But the Wing Zero Lucifer gracefully avoided the beams and ascended into the heavens, and pointed the eight Messer Zwergs, which had finished cooling down, along with the Buster Rifles mounted on both hips toward the immobilized Gundam Storm Bringer.

“Hold it right there!” BALL shouted in place of GIMM, who was desperately trying to reboot his MS.

“You’ll destroy the whole Colosseum along with the Gundam Storm Bringer if you fire now!”

But Rock was blind with rage, and didn’t hear any of BALL’s pleas.

“The pain you caused has made me pulverize everything… All this suffering… Genocide Tenfold Buster!!!!!”

Rock’s right hand was tightly wrapped around the grip and his thumb hovered over the trigger switch when a bright light suddenly surrounded his Wing Zero Lucifer.

He couldn’t see anything. But he didn’t want to close his eyes. Mesmerized by the light, he gazed toward the origin of the light, toward his future…

It was the same phenomenon that had occurred when he received the Golden Poly-cap.

He heard a voice.

“You already knew what you wanted to do… Now let them have a piece of what you have earned.”

It seemed to GIMM, BALL, and the other students that the light was being emitted from the Wing Zero Lucifer itself. The Gunpla slowly descended as the light dimmed, and Rock was seen standing in front of it. He faced the Gundam Storm Bringer.

Returning to the school building, Rock handed his Golden Poly-cap to GIMM and BALL.

The two looked at each other in confusion.

“We messed up your Academy, and we would’ve lost that fight if you kept on going...”
“This is a sign of gratitude,” Rock calmly replied.

“You two brought me back to the reason why I created this academy. It’s because I loved Gunplas and wanted to spread the joy.”

Rock tookGIMM’s hand and placing the Golden Poly-cap in it.

“By the way,” BALL said as he turned to GIMM, scratching his head apologetically.

“We’re always given the Golden Poly-caps like this without actually earning them.”

Rock suddenly remembered the voice he heard in the light. ‘Now let them have a piece of what you have earned.’

“It may be that the Golden Poly-caps are the ones looking for you.”

GIMM didn’t have a clue what Rock was saying.

“By the way,” BALL interrupted, “isn’t the statue of the Golden Poly-cap in front of the main gate the symbol of the academy? Are you sure we can have it?”

Rock headed toward the main gate.

GIMM and BALL also turned to the gate and saw the students with nippers and modeling knives still in their hands, warmly gazing at their principal.

A clear blue sky spread infinitely into the distance, overlooking the academy. It was a beautiful sight, as refreshing as a spring day, except for the fact that every one of the students of the Girls’ Gunpla Academy were not actually girls, and were faking their actual identities just like GIMMINA and BALLY.