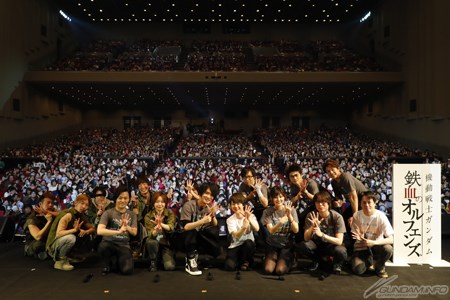 At the event, there was a screening of episode 50, the final episode of the series that aired the day of the event, a talk corner hosted by the guests and actors, and a live musical performance of the OST by Iron-Blooded’s music director Mr. Masaru Yokoyama and the Tekkadan orchestra. The cast also performed a live reading of a newly written episode by Ms. Mari Okada.
The surprise guests this time were Mr. Genki Muro, voice of Delmas Altland, and singers of the series’ theme songs Ms. Uru and SPYAIR.

The talk corner, named the “Last Flag Talk,” began with random topics.
Mr. Yasuaki Takumi, voice of Akihiro, received the question “What was your most memorable line?” and recreated a scene from episode 46 through a live reading along with Mr. Muro when Delmas is injured and returns home. Furthermore, Mr. Yoshimasa Hosoya, voice of Orga Itsuka, spoke about an inside story during recording, “There was a different plan on how to carry out Orga’s assassination.”


A special concert was performed with “Freesia” by Ms. Uru and “RAGE OF DUST” by SPYAIR as they enthusiastically sang, making joyful voices rise from each seat in the venue.
A video message was then presented by Ms. Yuka Terasaki, voice of Kudelia Aina Bernstein, Mr. Yuichiro Umehara, voice of Eugene Seven Stark, and Mr. Takahiro Sakurai, voice of McGillis Fareed, as they were unable to attend the event. Each person commented on their experience with the final episode and conveyed messages to the audience. Ms. Terasaki said that when she saw Akatsuki, Atra and Mikazuki’s son who appears in the final episode, “He was so precious that I cried a little.”

Although many fans were seen crying during the beginning of the final episode screening, the audience rose from their seats, becoming very excited and heated, during the final stages of the event when the special concert and other activities took place. This made the event an enormous success.
Lastly, a commemorative photo was taken of the voice acting cast with the audience. Afterwards, with the voices of the cast all together as one, the event ended with their words of gratitude.

Producer Masakazu Ogawa
This series had an intense story, but if it’s something that we can do, like the period between season 1 and 2, or stories about times when everyone is enjoying themselves, I believe it would be nice to make something again with everyone together with the Director. If there is an opportunity like that in the future, I’ll look forward to receiving your support once more. Thank you.

Director Tatsuyuki Nagai
I’m happy to be able to watch the final episode with everyone today. Thank you very much for watching over their story.

Genki Muro
I have many positive as well as negative feelings stirring in me; I’m very happy that I was able to participate in such a wonderful series. I believe there will be more in the future as well. Thank you very much.

Mutsumi Tamura
At first, though I had a nameless role like Delmas and the others, in the end, he became a very good character with a name. I believe this series was able to end in a good way while facing the future. I ask for your continued support in the future as well.


Hisako Kanemoto
I believe that this was a very warm final episode that will lead to the future. Orphans makes one think about the forms of family and you learn that a person’s love is large and deep.

Taishi Murata
I believe that everyone understands what Shino was feeling and why he sacrificed his life. I, too, feel like I’ve grown through Shino. I can feel the love everyone has for Orphans to have all of you gathered here today like this.

Yasuaki Takumi
When I first received this role, I thought that he was the exact opposite of the characters I’ve done up until now. However, there were many times when now I feel connected to him. I wouldn’t have been able to become Akihiro by myself and I’m happy that everyone watched over him until the very end as he tried his best to live for everyone’s sake.

Masaya Matsukaze
I am thankful from the bottom of my heart to be able to participate in such a wonderful series and to receive support from so many people for a series that I can confidently recommend to others. In the future when you hear Orphans, I hope you will gather again.

Yoshimasa Hosoya
I am happy to be able to create this series together with such wonderful cast members. I’m very grateful to the various responses and opinions we received from everyone. There were also times when I thought, oh, my heart is being stirred up, while working on Orphans. Please continue to support Iron-Blooded Orphans in the future as well.

Kengo Kawanishi
I am grateful from the bottom of my heart to everyone that I was involved in such a long series, that this was my first leading role, to have that role be in such an amazing series, and that I am standing here in this venue today. I am also grateful to everyone that came today. Although the TV series may have ended, I believe there will be more to come, so please continue to support the series in the future as well. Thank you very much for today. 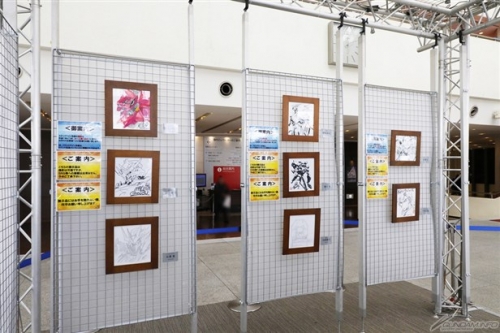 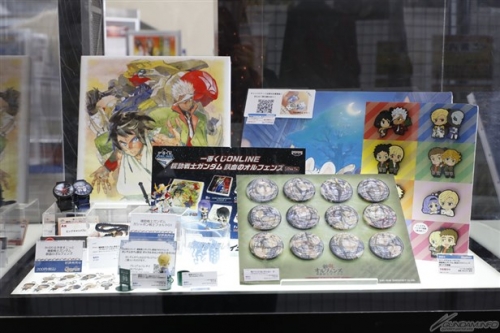 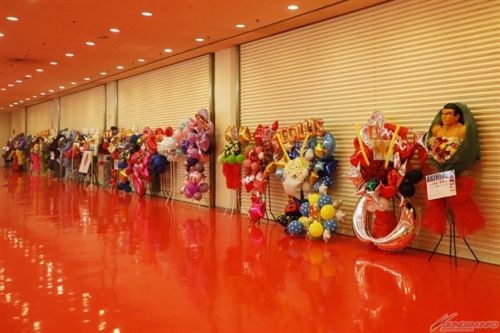 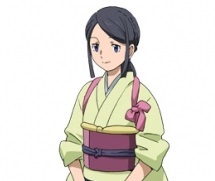 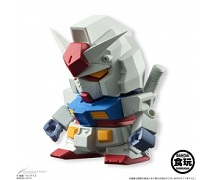