See the champions crowned from PC or smartphone! 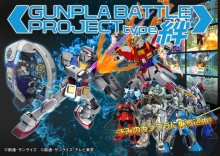 Gunpla Builders World Cup, established in 2011 to encourage the tradition of Gunpla craftsmanship, expand the Gunpla market, and encourage the exchange of ideas between Gunpla fans from Asia and beyond, brings the most artistic efforts of the world's Gunpla lovers together yearly.
This year's Japanese champions will be honored on the 22nd—see the moment when Japan's best find out who will take on the world!

You can watch on PC at Bandai Hobby Site or on smartphone via the Gundam Fan Club app. Either way, don't miss the streams!