"What is 'Gundam', anyway?" This simple (?) question is answered in our thirty-eighth casual weekly column just for new fans!

What lurks, albeit cutely, upon the ocean bottom? A super-simple intro column for new Gundam fans!
The new year brings new things—including a new set of columns about what makes Gundam Gundam.

One of the best things about Gundam is the passionate clashes between rivals. Worthy challenges for each other at times, mortal foes at others, these duos, and their sides and philosophies, clash on the battlefield... This is how Gundam rivalries are made.


[Part 1]
Gundam's rivals start out stronger than the protagonist! 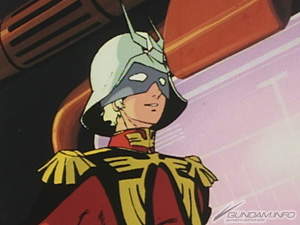 Surely everyone, from ages two to ninety-two, knows about Gundam's most famous pair of rivals: the Earth Federation's Amuro Ray and the Principality of Zeon's Char Aznable.

This duo, who I'm sure you expected to make their appearance today as soon as you saw this week's title, have to be among the most famous characters in Gundam.
Our protagonist, Amuro Ray, is a shy boy with an interest in robotics who lives on a space colony in Side 7. Although a civilian, he unexpectedly winds up at the controls of the Gundam, and in his first battle manages to destroy a Zaku belonging to the Federation's enemies, the Principality of Zeon. Following this, he's drafted into the crew of the Federation space battleship White Base.

His counterpart, Char Aznable, is already not only a Zeon soldier but an ace mobile suit pilot. Clever, brave, and handsome to boot, if there's a cheat code for life Char probably entered it. Amuro may manifest amazing powers after he awakens as a "Newtype", but the good-looking Char has enough of a head start than he still manages to keep up in appeal. 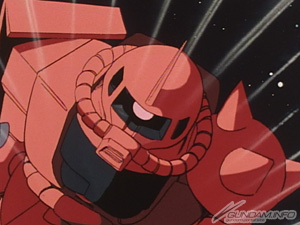 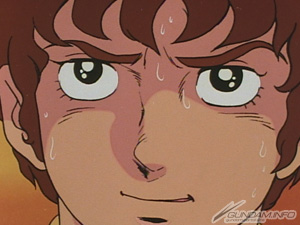 The two first meet on the battlefield in episode 2, "Destroy Gundam!"
The Federation's White Base flees from Char, known as the "Red Comet", and his bright-red Zaku. Amuro Ray is ordered to repel Char. Amuro is barely able to defend the White Base from Char's attacks, due mainly to the capabilities of the Gundam itself.

At this point, Char is a vastly more talented pilot. A report that an enemy mobile suit is closing in at triple normal speeds is enough to fill the White Base's wounded captain with terror that he's facing Char. There's simply no comparison that can be made, at this point, between Char (whose reputation has spread even among his enemies) and Amuro (who doesn't even rank a friendly slap from Bright yet.)

While Char's mission had failed, he came away convinced that the Gundam's pilot was no threat compared to its incredible performance, weaponry, and firepower. However, as the series progresses, Amuro gains experience as a mobile suit pilot, awakens as a Newtype, and matures into a suitable rival for the as-yet thought invincible Char. 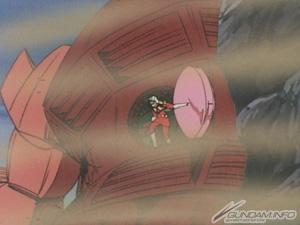 In episode 33, "A Fateful Encounter", the two meet face-to-face for the first time.
As Amuro struggles to free his car from a pool of mud, Char and Lalah Sune (a Newtype girl discovered by Char) drive by and help him tow it out.

While this is the first time they've seen each other's faces, Amuro is instantly certain that he's found his battlefield foe. However, when they introduce themselves and Char nonchalantly gives his name, Amuro is left unable to muster much of an outward reaction at all. What's with that lack of guts, kid?! If Sayla was there, maybe she's slap you into shape!

Char, on the other hand, is left with nothing but a tickling sense that he knows Amuro from somewhere. (← Maybe this is where Amuro first surpasses Char as a Newtype?)
Chipping in to help out an enemy soldier when he has car trouble... Char, maybe you really are the real deal. (claps)  The facade of a pleasant young man is almost enough to make you forget the black, bitter heart, full of hatred toward the Zabi family that governs Zeon, that lurks behind.

It's almost painful to watch Amuro go into full awkward teen meltdown mode as a real hunk (← though I suppose you can't tell under the mask) out on a date with an exotic beauty (← not actually a date!) pulls up, and be unable to even squeeze out a "Thank you" when prompted by Char.

However, as the show approaches its climax, Amuro suddenly steps his game up!
In episode 37, "Char and Sayla", Amuro is able to not only predict Char's moves in a Texas sandstorm, but also corner him after a an even fight. Char, panicked, (?!) triggers a false explosion and makes his escape (though it's fair to note that the Gundam itself was out of energy and unable to fight either.)

By episode 39, "Lalah's Dilemma," Amuro is able to fight Char in open space and even slice off his Gelgoog's left arm.  Char may prefer to blame his focus on revenge against the Zabis, but at the end of the day, he was saved by the rookie pilot Lalah, treated as nothing more than an annoyance, and in the end had to be carried away from battle by Lalah's Elmeth. No matter how you look at it, that's a poor showing. (← Or maybe an extremely impressive one from an awakened Amuro?)

Char may be gifted (← or just blessed, I supposed, you'd say about those looks,) but it's scarily plausible that while he was busy with other things (including a bit of ego-polishing) his once-weak rival Amuro would taken the upper hand and pushed him to near-irrelevance. Of course, this doesn't seem to have stopped his sympathetic personality and good looks from making him more popular than Amuro... (← Now, what did I tell you about Char ten or twenty columns ago?) Anyway, this pair have to be thought of as Gundam's eternal rivals.

While their rivalry continues far beyond this point, though, that's a story for another time.

For now, that's all for our first look at the rivals of Gundam!