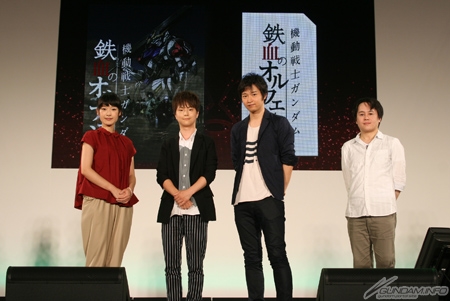 First, Kawanishi, Terasaki, and Ogawa took the stage, and presented the Japanese premiere of the season’s second trailer. Kawanishi remarked “while this is my first time seeing the completed trailer, I saw the script during recordning, and I’m hyped!” Terasaki noted that she “got a bit emotional watching the events of season 1 again, but steeled myself and moved on to the new tomorrow they created.”

Next, new characters, cast members, and mobile suits were revealed. Ryota Osaka, one of the new cast members, also made his appearance, and the group began to speak about season 2.

Starting with their roles, Kawanishi said that his Mikazuki was “still fighting tooth and nail, just like season 1.” About dubbing, “I was worried that since so much time has passed since recording the first season, I wouldn’t be able to become Mikazuki easily, but everyone at the studio was so welcoming that I slipped right back into the role.”

Terasaki described Kudelia’s story in season 1 as “a coming-of-age. In season two, she’s more of a business partner to the Tekkadan, and I’m looking forward to portraying her as a grown woman,” to which Ogawa responded “She definitely was the character who grew the most in the first season. But in season 2 she’ll have new, grownup problems, right?”

When asked about his new character Hush, Aikawa mentioned that “he’s significantly more ambitious than he looks. While he’s a Tekkadan member, he has little love for its mission and even less for Mikazuki,” with Ogawa noting that “how this dislike for Mikazuki will play out will be interesting to see.”

After characters, they discussed the show’s mecha. An HG Gundam Barbatos Lupus was brought out, and Kawanishi was “astonished by its detail [and] excited just imagining [himself] piloting it.” Osaka “knew how he felt, and [was] a bit jealous.”
Then a selection of new Iron-Blooded Orphans merchandise was shown—though it didn’t include the Tekkadan varsity jacket worn by Atra in the trailer, though Terasaki “wish[es] they’ll come out with it!

Last but not least were the announcement of artists for the opening and ending themes, as well as a fan event planned for December 3rd. As the curtain was about to drop, the guests left us with these final comments:


Producer Masakazu Ogawa
We’re doing our best to make something great. We hope you enjoy!

Ryota Osaka
While my character is new for the second season, there are also many other new introductions, so I was able to fit right in at recording. I’ll be doing my best. Thank you all!

Yuka Terasaki
The Tekkadan is fighting on for another season! Iron-Blooded Orphans is back and better than ever! Enjoy!

Kengo Kawanishi
I was here last year to announce the show, and I’m overjoyed to be back and see how many people enjoyed it. The cast and staff are all giving 120% all the way through, so keep watching! Thank you all!


Full details on the season 2 info can be seen in this article. 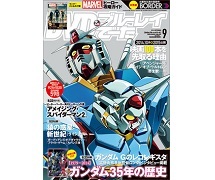